The Moon at the End of My Street 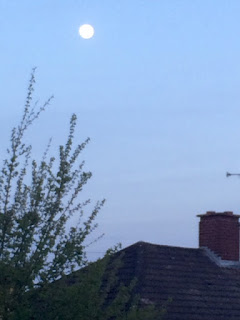 According to Lawrence, who insists on an essential and dynamic correspondence between man and the heavenly bodies, the moon is a strange, white, soft-seeming world; a great cosmic nerve centre from which we quiver forever.

Now, as readers of this blog may know, I'm philosophically hostile to such naive vitalism and what Quentin Meillassoux terms correlationism. However, la luna continues to attract my interest and affection and I agree with Lawrence that it's a far lovelier thing than merely a dead lump of rock in the night sky.

And so it is that - just the other evening - I took the above photo of the moon at the end of my street, which, coincidentally, happens to be the title of a new collection of poems by Isabel del Rio, who, kindly, has given me permission to reproduce the following lines from a verse entitled 'If you and I did not have the moon':

If we did not have the Moon,
we would not know what to call
the night, perhaps only
darkness, we would describe it
only by its colour, black,
by its lack of purpose, pointless.


Other lunar-inspired verses in Ms del Rio's new book include 'wondering moon', 'this Moon is but a quaver on the sky', and 'Moon Haiku Number 1':


Obviously, as a poet, there are moments when Ms del Rio falls into the same anthropocentric idealism and affectation as Lawrence. It's not so much that either author wilfully privileges the human over other objects, but each seems unable to help thinking the latter unless they conform to the mind of a knowing subject and in this way become products of human cognition and aesthetic fancy.

Still, it's been said that I often do the same, despite my best efforts to adhere to a strict form of speculative realism and object-oriented ontology (i.e. to know that the moon and stars exist independently of Man and are not ontologically exhausted by their relation to us), so who am I to criticise ... 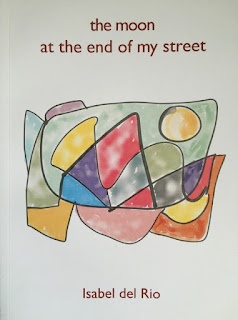 Note: Isabel del Rio is a writer and linguist, born in Madrid and living in London. She writes in English and Spanish and has published fiction and poetry. Her new book is published by Friends of Alice Publishing (2016).

Posted by Stephen Alexander at 14:02