Freedom? There Ain't No Fucking Freedom! 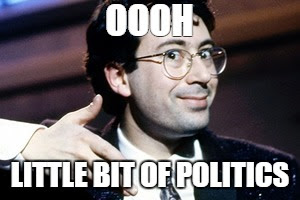 What the tabloids like to call Freedom Day - June 21st - the day when the UK is due to abandon the last of its lockdown restrictions and allow citizens to finally throw off their face masks and socially interact, is increasingly likely to be postponed amid mounting concern among scientists and government advisors about the rapid spread of the so-called Delta variant (i.e. the mutant version of Covid-19 that was first recorded in India and is thought to be much more transmissable).
Health Secretary, Matt Hancock, is absolutely open to the idea of a delay and one suspects that a significant number of the Great British Public would rather like the lockdown to continue indefinitely, so scared witless have they become over the last 16 months and so happy to have the authorities micromanage their every activity in the name of health and safety (i.e., the greater good as conceived within an era of biopolitics).
To be honest, I think the cynically-named Freedom Day is a sham and that talk of the world post-pandemic is mostly in vain. Things will never return to normal; our liberty has been fatally compromised and the Great Reset is in motion. We are all now just NHS numbers.
To paraphrase D. H. Lawrence writing after the Great War:
We thought the old times were coming back. They can never come back. Each one of us has had something injected into them. So we have to adjust ourselves to a new world. [1]
Sadly, in Boris Johnson and Matt Hancock, we have got the leaders we deserve. To quote Lawrence speaking of Lloyd George and Horatio Bottomley, but with Johnson and Hancock in mind:
"These two spoke the Voice of the People [...] They said what the vast majority were choking to say. They said it all enormously, endlessly, and with complete success." [2]
My hope is that one day we'll remember these two gentlemen with shame:
"Why? - Because they said things that were not true, and because they urged us to actions that were meaner, smaller, baser, crueler than our own deep feelings." [3]
Notes
[1] D. H. Lawrence, Movements in European History, ed. Philip Crumpton, (Cambridge University Press, 1989), p. 260. The original passage reads: "We thought the old times were coming back. They can never come. We know now that each one of us had something shot out of him. So we have to adjust ourselves to a new world."
[2] Ibid., p. 259.
[3] Ibid.
Posted by Stephen Alexander at 19:51