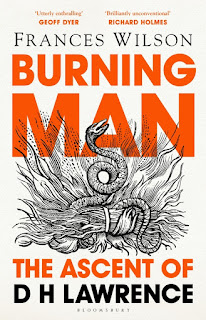 (Bloomsbury, 2021)
I.
What does it mean when a biographer of D. H. Lawrence declares that she is "unable to distinguish between Lawrence's art and Lawrence's life"?*
It means that she fails to understand that literature is more than merely the expression of lived experience and that the artist is engaged in a creative enterprise of thought; not merely recalling past events and providing (sometimes amusing, often malicious) portraits of persons known to them, but playing with percepts  and affects.**
And so (once more) to the case of Frances Wilson ...
II.
The problem with failing to understand how and in what way writing exceeds life, is that once a biographer has successfully mapped the fiction on to a reality that is external to the text and checked for accuracy of representation, there's not much more for them to do or say. The vol-au-vent is stuffed and it's stuffed with chicken.
This partly explains why, in a study of over 400 pages, Wilson has very little to tell us about several of the major works produced by Lawrence in the period that is her main focus of interest (1915-1925). What it doesn't explain, however, is why a self-professed Lawrence loyalist is so dismissive of his novels.
Women in Love (1920), for example, is described by Wilson as a work lacking in the atmospheric grandeur of The Rainbow and judged to be a failed literary experiment when compared to Virginia Woolf's The Waves. It can only be considered the prophetic masterpiece that Lawrence believed it to be, she says, if readers are prepared to agree with the views of Rupert Birkin: "and the only people who agree with Birkin are teenagers" [113].***
The Lost Girl (1920), meanwhile, is described by Wilson as a book that is both mad and bad: "Its badness is because Lawrence had lost interest in human psychology [...] And its madness is the result of his tearing along like a dustball without having the faintest idea of what's coming next." [223]
Aaron's Rod (1922), on the other hand, "is not a mad book in the sense of engagingly bonkers" like The Lost Girl, but is neverthess barely sane and yet another good book gone bad: "Lawrence allowed his anger to spoil his beautiful story [...] shouting and yelling and ranting about love and power and how women must submit to men ..." [256-257]
As for The Plumed Serpent (1926), well this is simply a sour-flavoured version of the superior Quetzalcoatl: "Writing with his usual rapidity, he doubled its length and spoiled its beauty" [398], says Wilson. She goes on to add: "The Plumed Serpent is alien and alienating, hard to forgive and hard to forget. It is also boring, at times brutally so." [399]
One can only conclude that with friends like Frances, Lawrence hardly needs enemies ...
Notes
* Frances Wilson Burning Man: The Ascent of D. H. Lawrence, (Bloomsbury, 2021), p. 3. Future page references will be given directly in the text.
** These terms, used by Deleuze and Guattari to discuss literary practice as distinct from philosophy, have a very precise and important meaning. Percepts are not merely perceptions; they are independent of the subject who experiences them. Similarly, affects are not merely feelings or affections; they pass beyond those who undergo them. Together, percepts and affects form a bloc of sensations, or what is usually referred to as a work of art existing in itself and not forever tied to a dead author. If one must talk about literature as life, then it's important to conceive the latter in a complex onto-ethical manner as a non-organic power (i.e., as something singular, impersonal, and beyond good and evil). The task of literature is to free life from what imprisons it - not capture it in words.
See Gilles Deleuze & Félix Guattari, What is Philosophy?, trans. Hugh Tomlinson and Graham Burchill, (Verso, 1994), Part. 2, Chapter 7.
See also Daniel W. Smith's excellent Introduction to Deleuze's Essays Critical and Clinical, trans. Daniel W. Smith and Michael A. Greco, (Verso, 1996), pp. xi-liii. As Smith crucially notes: "For Deleuze, writing is never a personal matter. It is never simply a matter of our lived experiences [...] Novels are not created with our dreams and fantasies, nor our sufferings and griefs, our opinions and ideas, our memories and travels, nor 'with the interesting characters we have met [...]'" [xv].
Unfortunately, Wilson doesn't appear to be much interested in any of this; she just wants to talk about autofiction in the most personal sense. She writes on literature not as a philosopher or even a serious critic, but as a biographer concerned with human lives, telling tales, and passing the word along.
*** To read my original reflections on Frances Wilson's Burning Man, click here. And to read my response to this attack on Women in Love and the teenage mentality, click here.
Posted by Stephen Alexander at 10:28