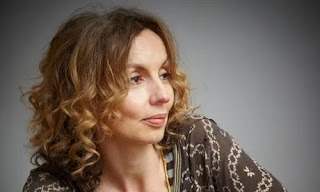 Photo of Frances Wilson by Jonathan Ring
I.
Once, in 1983, when I was twenty-years-old, I was riding in a car with a producer from the BBC's Community Programme Unit, on the way to Derby to film a piece of CND propaganda masquerading as investigative journalism, entitled 'Doctors Against the Bomb'.
Heading as we were to the East Midlands, it was perhaps inevitable that the name D. H. Lawrence entered the conversation: I said I loved Lawrence and his writing; he - the producer - told me with a patronising tone and superior little smile: "Everybody does when they're young. But, don't worry, you'll grow out of it."
It's something I've never forgotten: and I determined at that moment to never abandon Lawrence or repudiate his influence on my thinking (and, indeed, my life).
II.
I was reminded of this incident when I read the following crass sentence in Frances Wilson's new biography of Lawrence, Burning Man (2021):
"Only if we agree with Birkin on all counts does [Women in Love] become the prophetic event that Lawrence wanted it to be, and the only people who agree with Birkin are teenagers." [1]
What this reveals, I'm sorry to say, is that Wilson is one of those high-brow readers who, whilst posing as a Lawrentian loyalist, sneers from her privileged position at his immaturity and despises a character like Rupert Birkin for displaying the uncompromising intensity of youth.
She writes:
"There are wonderful things in Women in Love, but it is not the flawless masterpiece that Lawrence believed he had written. It is an experiment in the art of fiction [...] but we only have to compare the result with Virginia Woolf's The Waves to see that Lawrence has failed." [2]
Did Lawrence ever claim to have written a flawless masterpiece? I don't think so. He wasn't interested in literary perfection - nor, for that matter, in comparative success. Besides, doesn't all great art ultimately fail? Its tragic beauty rests upon this fact.
At the beginning of her study, Wilson says that, as an adolescent, she found Lawrence incomparable as an author and loved his fierce certainties:
"I liked the fact his women were physically alive and emotionally complex while his men were either megaphones or homoerotic fantasies, that he cared so much about the sickness of the world, that he saw in himself the whole of mankind; I liked his solidarity with the instincts, his willingness to cause offence, his rants, his earnestness, his identification with animals and birds, his forensic analyses of sexual jealousy, the rapidity of his thought, the heat of his sentences, and his enjoyment of brightly coloured stockings." [3]
Alas, returning to Lawrence as a middle-aged biographer, she now finds that things have changed:
"Where once I found insight, I now find bewildering levels of naivety; for all his claims to prophetic vision, Lawrence had little idea what was going on in the room let alone in the world." [4]
Rather than consider that this disenchantment shows a loss of her own vitality, however, Wilson makes her snide little remark about Lawrence's fiction appealing only to teenagers. But, as Lawrence himself says, perhaps the mentality of a teenager is preferable to that of a jaded intellectual who now chooses to sit safely in judgement rather than risk falling in love.
Notes
[1] Frances Wilson, Burning Man: The Ascent of D. H. Lawrence, (Bloomsbury, 2021), p. 113. For a series of reflections on this book, click here and here.
[2] Ibid., pp. 112-113.
[3] Ibid., pp. 2-3.
[4] Ibid., p. 3. This is a sentence that could have been written by Geoff Dyer; another author who claims to love Lawrence and has in part built his own career as a professional writer upon Lawrence, but then dismisses much of his work and transforms him from a figure of hate into a figure of ridicule, as if that's performing him a service.
Posted by Stephen Alexander at 08:02