We Old Ones, We Are Still Here! 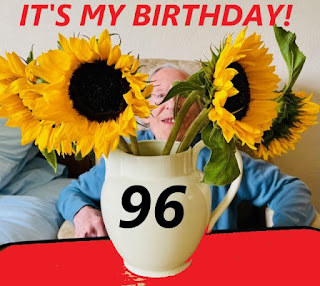 Meine Mutter celebrating her 96th birthday
The old ones say to themselves: We are not going to make way, we are not going to die,
we are going to stay on and on and on and on and make the young look after us
till they are old. - DHL [1]
I.
This Sunday, my mother will reach 96 years of age.
Some people say this is a real achievement, though I'm not sure about that; surely the achievement is dying an authentic death - something that requires courage and skill - not simply celebrating birthday after birthday and endlessly adding candles to a cake ...?
Having said that, surviving to a very old age and becoming a monster of stamina in the process does seem to suggest a powerful expression of will.
For even today, when - thanks to improved living standards and advancements in health care - life expectancy has significantly increased since the year my mother was born (1926), not many women in the UK will make it past 95 [2].
II.
Back in July 1926, D. H. Lawrence travelled north from Italy to Germany with his wife Frieda, in order to celebrate his mother-in-law's 75th birthday. In a letter to Edward McDonald, an American professor who was preparing a bibilography of his writings, Lawrence is scathing about the old who cling on to life and refuse to die:
"'Wir alten, wir sind noch hier!' she says. And here they mean to stay, having, through long and uninterrupted experience, become adepts at hanging on to their own lives, and letting anybody else who is fool enough cast bread upon the waters. Baden-Baden is a sort of Holbein Totentanz: old people tottering their cautious dance of triumph: 'wir sind noch hier: hupf! hupf! hupf!" [3]
III.
Three years later, in July 1929, and Lawrence is again in Baden-Baden for the Baroness's birthday, despite his previous determination not to go. As John Worthen notes, this was a bad move [4]. For whereas his previous visits had mostly been happy ones, and he had always been rather fond of his Schweigermutter, now he found her unbearable.
In a letter to his sister Ada, Lawrence writes:
"[...] Frieda's mother really rather awful now. She's 78, and suddenly is in an awful state, thinking her time to die may be coming on. So she fights in the ugliest fashion, greedy and horrible, to get everything that will keep her alive [...] nothing exists but just for the purpose of giving her a horrible strength to hang on a few more years." [5]
Later, in the same letter, he complains how his mother-in-law will not be left alone, even for a short period:
"No, she must have Frieda or me there. It's the most ghastly state of almost insane selfishness I ever saw - and all comes of her hideous terror of having to die. At the age of seventy-eight! May god preserve me from ever sinking so low." [6]
IV.
Now, to be fair to my mother, she doesn't gulp down the air in greedy gulps like the Baroness - doesn't actively fight to stay alive. She just sits quietly in her chair all day, like a black hole at the centre of the universe [7].
But I understand - and share - Lawrence's sense of horror and humiliation.
Notes
[1] D. H. Lawrence, 'The grudge of the old', in The Poems, Vol. I, ed. Christopher Pollnitz, (Cambridge University Press, 2013), p. 436.
[2] Readers interested in the national statistics estimating the number of people (mostly women) in the UK population aged 90 and over, between the years 2002 and 2020, can click here.
[3] D. H. Lawrence, letter to Edward McDonald (16 July 1926), in The Letters of D. H. Lawrence, Vol. V, ed. James T. Boulton and Lindeth Vasey, (Cambridge University Press, 1989), pp. 495-496. Lines quoted are on p. 496.
[4] John Worthen, D. H. Lawrence: The Life of an Outsider, (Allen Lane / Penguin Books, 2005), p. 400.
[5] D. H. Lawrence, letter to Ada Clarke (2 August 1929), in The Letters of D. H. Lawrence, Vol. VII, ed. Keith Sagar and James T. Boulton, (Cambridge University Press, 1993), pp. 397-398.