Being is Time: Life in the Present Perfect Continuous 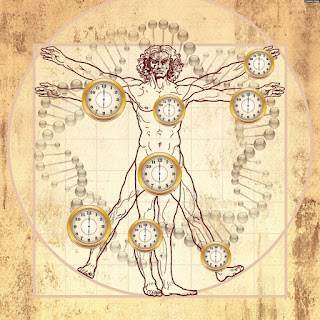 Image credit: UCLA / Horvath Lab
Somewhat paradoxically, whilst having a minimal sense of self on the one hand, I've always possessed a strong sense of self-continuity through time on the other, and have never really bought into the Shakespearean idea of there being seven distinct ages into which a single life might be neatly divided up [1].
Thus, when someone asked in relation to a recent post adapted from the Von Hell Diaries [click here] whether it made me sad to realise that forty years had passed since the events described on 3 October 1982 - or frightened to think that I would soon be passing from middle age to old age - I had to say no, not really.
For like Jaz Coleman, time means nothing to me, and whether something happened forty years ago or yesterday, it's all the same to me [2]. I am that unity of past, present and future. That is to say, I understand time not just as something that can be measured by the ticking of a clock, but as fundamental to our being. Indeed, one might even say that being is time.
And unlike the Killing Joke frontman, I don't even have to shut my eyes in order to remember childhood thoughts and feelings; for I still think those thoughts and experience those feelings. In other words, because I live in what might be termed by a grammarian as the present perfect continuous, I've no need to make an imaginative journey back in time, or to dream.
But aren't you worried that you're just stuck in the past?, asks the same interrogator.
Again, the answer is not really.
In fact, I'm more concerned - as a philosopher - with the consequences of privileging the present [3] and having a vulgar conception of time in which the past is denigrated as that which we must move on from and leave behind, as if no longer important, when, in fact, not only does the past inform the present, but it awaits us in the future too [4].
Notes
[1] I'm thinking here of the famous monologue in Act II, Scene VII of Shakespeare's pastoral comedy As You Like It (1623) which opens with the line "All the world's a stage". However, I'm aware of the fact that this division of human life into a series of stages was a commonplace of art and literature and not something invented by the Bard of Avon. Whilst ancient authors tended to think in terms of three or four such stages, medieval writers liked to think in terms of seven for theological reasons.
[2] I'm quoting from the Killing Joke song 'Slipstream', from the album Extremities, Dirt and Various Repressed Emotions, (Noise Records, 1990): click here. The track was written by Jaz Coleman, Geordie Walker and Martin Atkins. Lyrics © Universal Music Publishing Group.
[3] I am increasingly sympathetic to thinkers such as Heidegger and Derrida who are concerned that the understanding of Being in the metaphysical tradition is dominated by an ontological primacy of the present; i.e., that the present is viewed as more real or immediate than the past or future, with the former seen as merely the 'no-longer-now' and the latter as merely the 'not-yet-now'.
This tradition has run all the way from Aristotle to Hegel and beyond; see, for example, Lawrence's 1919 Preface to his New Poems (1918), in which he writes of the incarnate Now as supreme over and above the before and after and of the quivering present as the very quick of Time. For Lawrence, the past and future are mere abstractions from the present; a crystallised remembrance and a crystallised aspiration.
Lawrence's preface can be found as Appendix I to The Poems, Vol. I, ed. Christopher Pollnitz, (Cambridge University Press, 2013), pp. 645-649.
[4] I think Heidegger refers to this ontological baggage in Being and Time (1927) as Gewesenheit (i.e., our been-ness).
Posted by Stephen Alexander at 17:44