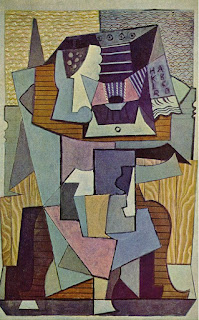 The Third Table (2012) is a fascinating short piece by the object-oriented philosopher Graham Harman. Whilst providing a convenient summary of the four principles of OOO, the author primarily wishes to offer us his reading of A. S. Eddington's well-known parable of the two tables; the first of which is the familiar table of everyday life; the second of which is the quantum table as understood by physicists.

For Eddington, the latter table is more real than the former, which, although visible and tangible, is essentially a 'strange compound of external nature, mental imagery and inherited prejudice'. You might be able to eat your supper off this first table, but that proves nothing to those who subscribe to the remorseless logic of modern science.

For Harman, however, both humanists who insist on the everday thing and physicists who care only for quantum reality, are equally mistaken - and for precisely the same reason. For both are engaged in reductionism, even though they reduce the object in opposite directions:

"The scientist reduces the table downward to tiny particles invisible to the eye; the humanist reduces it upward to a series of effects on people and other things. To put it bluntly, both of Eddington's tables are utter shams that confuse the table with its internal and external environments, respectively. The real table is in fact a third table lying between these two others."

Interestingly, it's not traditional philosophers who are best placed to understand this, in Harman's view, but artists: for artists aren't obsessed with reducing tables "either to quarks and electrons or to table-effects on humans". They are concerned, rather, with tables and other objects - sunflowers, nude women, pickled sharks, etc. - as things in themselves with their own autonomous and inexhaustible reality. And they know that the real table "is a genuine [substantial] reality deeper than any theoretical or practical encounter with it".

That is to say, the third table "emerges as something distinct from its own components and also withdraws behind all its external effects". If this sounds vaguely Aristotelian, that's because it is; although Harman assures us that it's Aristotle with knobs on (i.e., given a "properly weird interpretation" - weird being one of the privileged terms within Harman's vocabulary).

The problem that some will immediately identify, is that by locating der dritte Tisch in a space between the first and second types of table, Harman posits an object that lies forever outside the scope of human access; "a table that can be verified in no way at all", as he cheerfully concedes. Indeed, Harman suggests that practitioners of OOO should pride themselves on this fact:

"Any philosophy is unworthy of the name if it attempts to convert objects into the conditions by which they can be known or verified. The term philosophia ... famously means not 'wisdom' but 'love of wisdom'. The real is something that cannot be known, only loved."

Object-oriented philosophers - inasmuch as they remain lovers, not knowers - are thus old school philosophers. In a lovely passage, Harman continues:

Weird (or speculative) realists cannot be downward scientific reducers, nor upward humanistic reducers - they can only be hunters, forever chasing "ghostly objects withdrawing from all human and inhuman access, accessible only by allusion and seducing us by means of allure".

As suggested earlier, it may be artists who best fit this description:

"For on the one hand art does not function by dissolving ... [things] into their subatomic underpinnings. Quite obviously, artists do not provide a theory of physical reality, and Eddington's second table is the last thing they seek. But on the other hand they also do not seek the first table, as if the arts merely replicated the objects of everyday life or sought to create effects on us."

Art does something else, something more; it both establishes the existence of objects as things in themselves and alludes to objects that can never be made fully present. And philosophy, concludes Harman, would be wise if it gave up its pretensions of being a rigorous science and transformed itself into a uniquely vigorous art, thereby regaining its original character as a form of Eros:

Despite the obvious criticisms that can be made, I have to admit to finding Harman's thought very enticing and would happily pull up a chair at his third table in order to share a bottle of wine or eat some figs. Having said that, I do have a couple of concerns ...

Firstly, Harman rather overdoes the praise of artists - though he's by no means the first philosopher to do so and his flattery has earned him recognition as one of the hundred most influential figures on the international art scene; something he seems inordinately proud of, compensating as it does perhaps for the fact that many philosophers choose to ignore or dismiss his work entirely.

Still more problematic is the star-struck nature of Harman's boast in the introduction to his latest book that object-oriented ontology has attracted not only the interest of artists and architects, but also entertainers and actors. The charismatic nature of OOO, he claims, "has even captured the notice of celebrities ... with the popular musician Björk having engaged in correspondence with OOO author Timothy Morton, and the actor Benedict Cumberbatch having listened attentively to one of my lectures at a private residence in London".

This could possibly be the most embarrassing (and shameful) line ever written by a philosopher.  For as Nick Land once said: Nothing is more absurd than a philosopher seeking to be liked. I would therefore encourage Professor Harman to worry less about sucking-up to a pretentious singer-songwriter and a big posh sod with plums in his mouth, and concentrate instead on persuading colleagues within the world of philosophy to take his writing more seriously.

Secondly, whilst I agree that philosophy should always be conceived in terms of Eros, I see it as a far more perverse and transgressive form of love than Harman; one born of disease and the madness of unconditional desire, or what Land terms libidinal materialism.

Thus, whereas he thinks of objects as rather shy and retiring - almost coy - and insists we must talk about them with poetic metaphors and maybe a dash of saucy innuendo (OOO-er missus), I think of objects as promiscuous and obscene; things that don't just seek to seduce us from the shadows, but which indecently expose themselves and seek to ravish us in broad daylight if given the opportunity.

However, as I'm not one of the top hundred thinkers on anybody's list and have never had Sherlock listening attentively to one of my lectures, there's really no reason why readers should favour my (equally unverifiable) view over Harman's - unless, of course, it pleases them to do so ...

Posted by Stephen Alexander at 18:13