Sungazing (With Reference to the Case of Juliet, the Lawrentian Sun-Woman) 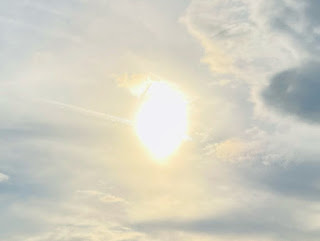 Sungazing (SA/2022)
"And as she lay, she looked up through her fingers at the central sun
whose outer edges streamed brilliance."
I.
Juliet, the protagonist at the centre of D. H. Lawrence's solar-erotic tale entitled 'Sun', is an embryonic Lady Chatterley; rich, bored, and sexually frustrated. However, instead of taking a conventional lover, she establishes a perverse relationship with the sun, that strangest of strange attractors.
One morning, as Juliet lay masturbating in her bed and gazing intently as the sun "lifted himself molten and sparkling, naked over the sea's rim" [1], she realised that her body belonged to the star around which the earth and all the other planets revolve and that her relationship with the sun mattered far more to her than being a wife and mother [2].
Of course, such a relationship - as a form of edgeplay [3] - is dangerous as well as pleasurable. For whilst the sun may kiss us into life, it cares nothing for the personal, the egoic, or the human. In fact, as Juliet discovers, it incinerates these things and if the sun helps her overcome her depression, so also does it burn out her pale-faced American idealism and threaten her status as a modern independent woman.
II.
Of course, Juliet is not the first person to gaze lovingly at the sun and lie naked before him.
Indeed, some proponents of New Age philosophies - apparently drawing upon ancient esoteric teachings - explicitly advocate staring at the rising or setting sun for unusually prolonged periods, in order to gain physical and spiritual well-being.
The fact that looking directly at the sun, even for a short time, can cause solar retinopathy and lead to permanent damage or blindness, is not something that seems to cause adherents of sungazing any real concern. They don’t deny such risks, but they do play them down and many assert that, if done with due diligence, sun-gazing can actually improve eyesight [4].
Indeed, some sun-gazers claim that not only does the practice make you feel happier and healthier, but it can directly increase your energy levels and thus radically reduce the need for food: that one can, as it were, meet one's nutritional requirements directly from sunlight, just like a plant.
Again, the fact that people don't possess chlorophyll and so cannot photosynthesise is discreetly overlooked and, as with other forms of inedia, there is no credible scientific evidence to support this amusingly bonkers claim [5].
Notes
[1] D. H. Lawrence, 'Sun', in The Woman Who Rode Away and Other Stories, ed. Dieter Mehl and Christa Jansohn, (Cambridge University Press, 1995), p. 20.
[2] Cf. Lawrence's poem 'Sun-women' where he writes of women who belong neither to men nor their children - nor even to themselves - but to the sun. The Poems, Vol. I, ed. Christopher Pollnitz, (Cambridge University Press, 2013), p. 456.
Admittedly, Lawrence doesn't  explicitly say tha Juliet is masturbating in bed before the sun. However, the following lines undeniably suggest a state of heightened sexual arousal:
"It was as if she had never seen the sun rise before. She had never seen the naked sun stand up pure upon the sea-line, shaking the night off himself, like wetness. And he was full and naked. And she wanted to come to him.
So the desire sprang secretly in her, to be naked to the sun. She chesished her desire like a secret. She wanted to come together with the sun."
[3] Edgeplay is a term derived from the kinky world of BDSM and refers to any form of sexual activity that involves the risk of physical harm to participants. Sun-fucking, at the very least, might result in a bad case of sunburn (which in turn could lead to skin cancer) and sungazing very obviously risks blindness, although, for Juliet, her (temporary) sun-blindness is like a richness to her.
[4] I’m thinking here of the so-called Bates Method, a form of alternative eye-care developed by William Bates (1860-1931), who counted the visually-impaired Aldous Huxley amongst his famous followers.
[5] As the editors of the page devoted to sungazing on RationalWiki point out, the best that the sun can do when it comes to providing nourishment is stimulate production of vitamin D. However, as this happens in the skin - the sun's ultraviolet rays interacting with a protein known as 7-DHC - you still don't need to purposely stare at the sun.
This post is a revised extract from an essay entitled 'Sun-Fucked: On the Question of Solar Sexuality and Speculative Realism in D. H. Lawrence' (2012), which was published as 'Sun-Struck' on James Walker's Digital Pilgrimage blog in January 2019: click here.
Readers can find another extract from the above essay posted on Torpedo the Ark by clicking here.
Posted by Stephen Alexander at 17:58