To Hold On or Let Go (Reflections on a Garden Gnome) 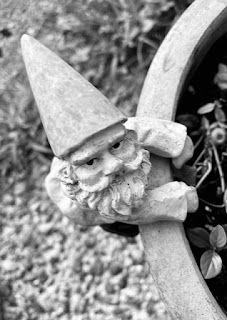 Festhalten (SA/2022)
I.
In a sense, much like the figure pictured above, we are all hanging on for dear life to the great flowerpot that is the world we know and love.
And of course, being able to hold on, hold tight, and hold still is crucial at times. But then, equally crucial, is knowing when and how to let go ...
II.
This question is often addressed by poets and playwrights; most famously by Shakespeare in Hamlet (1603) [1].
Interestingly, D. H. Lawrence chooses to discuss whether to let go or to hold on not only in terms of the individual, but at the level of the species:
Must we hold on, hold on
and go ahead with what is human nature
and make a new job of the human world?
Or can we let it go?
O, can we let it go,
and leave it to some nature that is more than human
to use the sperm of what's worth while in us
and thus eliminate us?
Is the time come for humans
now to begin to disappear,
leaving it to the vast revolutions of creative chaos
to bring forth creatures that are an improvement on humans
as the horse was an improvement on the ichthyosaurus?
Must we hold on?
Or can we now let go?
Or is it even possible we must do both? [2]
That's an amusing additional question to end on - one to which I'm not sure I know the answer: perhaps it is possible; perhaps it isn't.
But maybe the best way to confront the blackmail of an either/or is simply to refuse it like Bartleby; i.e., to choose not to choose as a matter of preference; to understand that when faced by a situation that demands we select one option or the other we can always smile say neither/nor, thank you very much [3].
III.
Philosophers and religious thinkers have also debated whether man's great goal is self-preservation (holding on) or self-abandonment (letting go).
Nietzsche for example, spoke in an early essay of man as a being who clings on the back of a tiger which empowers but also threatens to devour him [4].
However, he also writes about the need for man to let go - of the past, of God, of friends, etc. - and discover how to forget (a crucial aspect of innocence as Nietzsche understands the latter); don't be a memory-monger, he says, learn, rather, to love fate (i.e., embrace a kind of non-willing and move towards a state of what Heidegger likes to term Gelassenheit - a mixture of serenity, joyful wisdom, and a sense of release) [5].
That, I suppose, is the vital point; letting go is also a letting be, allowing things to sparkle in their own freedom and mystery.
Notes
[1] I'm referring, of course, to the the opening line of the soliloquy given by Prince Hamlet in Act 3, Scene 1: "To be, or not to be, that is the question." For earlier refelctions on the verb to be, see the post of 5 August 2022: click here.
[2] See D. H. Lawrence, 'To let go or to hold on -?', in The Poems Vol. I, ed. Christopher Pollnitz, (Cambridge University Press, 2013), pp. 372-73. Note that this is not the full poem reproduced here; there are five other stanzas before these closing verses.
[3] Having said that, I'm not a great fan of Herman Melville's figure of Bartleby the Scrivener; see what I write in the post published on 31 January 2013: click here.
[4] See Nietzsche, 'On Truth and Lies in a Nonmoral Sense', in Philosophy and Truth, ed. and trans. Daniel Breazeale, (Humanities Press International, 1993), p. 80. I discuss this idea in a post published on 23 September 2020: click here.
[5] Heidegger borrowed the term Gelassenheit from Meister Eckhart and the Christian mystical tradition. He first elaborated the idea in a 1959 work which included two texts: Gelassenheit and Zur Erörterung der Gelassenheit: Aus einem Feldweggespräch über das Denken. An English translation of the latter was first published in 1966 as "Conversation on a Country Path about Thinking". It can now be found as Country Path Conversations, trans. Bret W. Davis, (Indiana University Press, 2010).
For a post published on 24 February 2021 in which I discuss the idea of Gelassenheit in relation to the Money Calm Bull: click here.
Posted by Stephen Alexander at 14:58