D. H. Lawrence and a Postcard from Paris 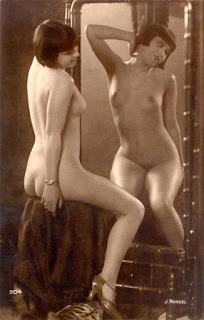 Erotic French postcard featuring a photo of
Alice Prin (aka Kiki de Montparnasse)
by Julian Mandel (c. 1920)
D. H. Lawrence opens his essay 'Pornography and Obscenity' with a liberal acknowledgement that "what is pornography to one man is the laughter of genius to another" [1]. It's a fine definition.
However, it isn't long before he puts his reactionary hat back on and calls for the rigorous censorship of what he terms genuine pornography. Genuine pornography - which Lawrence distinguishes from the erotic aspect of art - is secretive in nature and almost always underworld. Secondly, it is an affront to sex and the human spirit:
"Pornography is the attempt to insult sex, to do dirt on it. This is unpardonable. Take the very lowest instances, the picture post-cards sold underhand, by the underworld, in most cities. What I have seen of them have been of an ugliness to make you cry. The insult to the human body, the insult to a vital human relationship! Ugly and cheap they make the human nudity, ugly and degraded they make the sexual act, trivial and cheap and nasty." [2]
Blimey! It makes you wonder what kind of cards Lawrence had been shown; as well as where, when, and by whom ...? As he'd been in Paris for a month shortly before writing his essay, it's possible that he was shown some saucy postcards by one of the bouquinistes plying their trade along the banks of the Seine.
The amusing thing is that - just a few lines later - Lawrence feels obliged to acknowledge that "the human nudity of a great many modern people is just ugly and degraded, and the sexual act between modern people is too often the same, merely ugly and degrading". This would suggest that genuine pornography is actually a truthful representation of bodies and acts; a form of graphic realism that does away with the ideal fantasy of sex as something pure and pristine.
There's a further irony in the fact that later in the same year - 1929 - thirteen of Lawrence's paintings would be seized by the police from the Warren Gallery in London and described by an octogenarian magistrate in pretty similar terms - gross, coarse, hideous, unlovely and obscene.
Now, if we think Frederick Mead's reaction unfair and slightly hysterical, then mayn't we also challenge Lawrence's view of French postcards ...?
II.
The pornographic postcards with which Lawrence confesses at least a vague familiarity, have, for us, a kind of sepia-toned charm that makes one nostalgic for a time gone by. And, whether Lawrence wants to admit it or not, such images have a long, complex, and intimate relationship with the history of art and photography in which the human figure is so central.
By the 1860s and '70s, nude photos were all the rage in Paris, though the authorities still had a degree of control over their production and circulation. However, thanks to a relaxation of censorship laws and new methods of photographic reproduction, the trade in (increasingly risqué) images in the form of carte postales grew dramatically during the following decades, both in the domestic market and internationally.
Not only did street vendors offer such, but they were sold by wine merchants, café owners, tobacconists, barbers, and, of course, the second-hand booksellers who lined the Seine. As one commentator notes: "It is entirely possible that some two to four million nude photographs were in circulation by the end of the nineteenth century, many of them graphically pornographic ..." [3]
Some cards featured anonymous prostitutes or working-class girls looking to make a little extra cash; others featured well-known models and performers, happy to pose au naturel or take part in a little faux lesbianism for the camera. Often sold in sets of up to a dozen, the cards were avidly collected (though, for obvious reasons, rarely posted in the mail).
By the time of Lawrence's death in 1930, the heyday of the French postcard had pretty much come and gone and the 1940s and 50s saw the rise of the pin-up magazine, which, one suspects, Lawrence would not have approved of either.
Notes
[1] D. H. Lawrence, 'Pornography and Obscenity', in Late Essays and Articles, ed. James T. Boulton, (Cambridge University Press, 2004), p. 236.
[2] Ibid., p. 241.
[3] Raisa Rexer, 'The Naked Truth About French Postcards', on the Wonders and Marvels website, click here.
Readers interested in this topic might like to see Nigel Sadler's book Erotic Postcards of the Early Twentieth Century, (Amberley Publishing, 2015), in which he explores the changes in social attitudes, fashions, and technology through the medium of erotic postcards.
Posted by Stephen Alexander at 10:26