Reflections on a Green Carnation 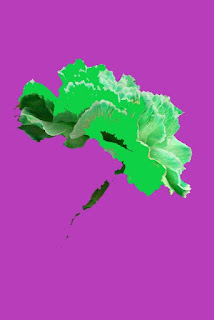 "When Oscar Wilde said that it is nonsense to assert that art imitates nature, because nature always imitates art, that is absolutely true of human nature."  [1]
It might surprise some readers to discover that this is D. H. Lawrence writing in agreement with Wilde and his anti-mimetic philosophy. It might further surprise them to discover that in the same text he goes on to dismiss the notion of spontaneous human nature and attack the idea that our feelings arise from deep within of their own accord:
"The thing called 'spontaneous human nature' does not exist, and never did. Human nature is always made to some pattern or other. The wild Australian aborigines are absolutely bound up tight, tighter than a China-girl's foot, in their few savage conventions. They are bound up tighter than we are. [...]
And this we must finally recognise. No man has 'feelings of his own.' The feelings of all men in the civilised world today are practicaly all alike. Men can only feel the feelings they know how to feel. The feelings they don't know how to feel, they don't feel. This is true of all men, and all women, and all children." [2]
And this, concludes Lawrence, is central to the agony of our human existence: "that we can only feel things in conventional feeling-patterns", rather than directly express the strange howlings of the yeasty soul [3].
To do that, we must either give birth to a new humanity - perhaps what might even be described as a posthuman humanity - or we must find a way to become-animal, become-demon ... [4]
Notes
[1] D. H. Lawrence, 'Introduction (version I) to The Memors of The Duc de Lauzan', in Introductions and Reviews, ed. N. H. Reeve and John Worthen, (Cambridge University Press, 2005), p. 89.
Lawrence is referring to Wilde's essay 'The Decay of Lying', in Intentions (1891) in which he writes: "Life imitates Art far more than Art imitates Life [...] It follows, as a corollary from this, that external Nature also imitates Art." Of course, Wilde is by no means the first to advance such a thesis; Ovid, for example, anticipates the idea in Book III of Metapmorphoses.
[2] D. H. Lawrence, 'Introduction (version I) to The Memors of The Duc de Lauzan', in Introductions and Reviews, p. 89.
It might be argued that Lawrence is here reaffirming La Rochefoucauld's famous maxim: "Il y a des gens qui n'auraient jamais été amoureux s'ils n'avaint jamais entendu parler de l'amour."
[3] D. H. Lawrence, 'Introduction (version I) to The Memors of The Duc de Lauzan', in Introductions and Reviews, p. 90.
[4] See Deleuze and Guattari on the idea of becoming in A Thousand Plateaus, trans. Brian Massumi, (University of Minnesota Press, 1987).
In brief, becoming is an opening up to alien forces, but not so these can be filtered through the ego or experienced imaginatively. Becoming is not a fantasy; it is rather a real process involving events at the molecular level of forces. Deleuze and Guattari admire Lawrence as a writer precisely because he was able to tie his work "to real and unheard of becomings" [p. 244]. Becoming is diabolical in the sense that it fundamentally opposes the ontotheological belief in the immortal soul of Man as something fixed and essential.
For an earlier post on Lawrence and Wilde, click here.
Posted by Stephen Alexander at 07:22