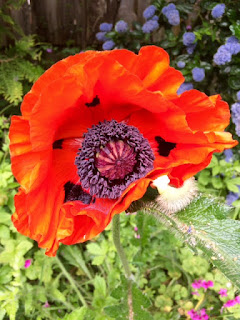 Bright Red Poppy (SA/2021)
This morning, a large bright red poppy has burst into flame at the top of my garden and it naturally triggers thoughts of Sylvia Plath's famous short verse* and, of course, D. H. Lawrence's philosophical remarks on the flower in his Study of Thomas Hardy** ...
Whilst for Plath the red poppy is a symbol both of pain and the release from pain (of sleep, of death), for Lawrence, the poppy reminds us that there is more to life than the will to self-preservation; that man - like flower - achieves his consummation or fourth-dimensional splendour by wasting himself, with no thought of the morrow.
Even an old man, afraid of the coming winter, who warns the young against behaving like a "reckless, shameless scarlet flower" [8], can't resist watching as the poppy unfolds into being. For he knows in his innermost heart, where there is no fear, that the poppy's blaze of colour is what matters most; that even "the latent seeds were secondary" [8] and that without its outrageous redness, it is just another herbaceous plant growing wild by the roadside.
And it is better that we too blossom like the poppy, rather than "linger into inactivity at the vegetable, self-preserving stage [...] like the regulation cabbage, hide-bound, a bunch of leaves that may not go any farther for fear of losing market value" [12]. For if we cannot flower into being, then we will thrash destruction about ourselves until we are rotten at heart.
Lawrence concludes:
"The final aim of every living thing, creature, or being is the full achievement of itself. This accomplished, it will produce what it will produce, it will bear the fruit of its nature. Not the fruit, however, but the flower is the culmination and climax [...]
And I know that the common wild poppy has achieved so far its complete poppy-self, unquestionable. It has uncovered its red. Its light, its self, has risen and shone out, has run on the winds for a moment. It is splendid. The world is a world because of the poppy's red. Otherwise it would be a lump of clay. [...] I tremble at the inchoate infinity of life when I think of that which the poppy has to reveal, and has not as yet had time to bring forth." [12-13]
Notes
* I'm referring here to 'Poppies in July', rather than 'Poppies in October'. But both poems can be found in Ariel (Faber and Faber, 1965), Plath's second book of verse, published two years after her death and edited (somewhat controversially) by Ted Hughes. (In 2004, a new edition of Ariel was published which for the first time restored Plath's own selection and arrangement of the poems.)
** D. H. Lawrence, 'Study of Thomas Hardy', in Study of Thomas Hardy and Other Essays, ed. Bruce Steele, (Cambridge University Press,1985), pp. 1-128. Page numbers given in the text refer to this edition. Note that although I only quote from chapter I, Lawrence it still singing the praises of the red poppy coming into bloom in chapter II:
"His fire breaks out of him, and he lifts his head, slowly, subtly, tense in an ecstasy of fear overwhelmed by joy, submits to the issuing of his flame and his fire, and there it hangs at the brink of the void, scarlet and radiant for a little while, imminent on the unknown, a signal, an out-post, an advance-guard, a forlorn, splendid flag, quivering from the brink of the unfathomed void, into which it flutters silently [...]" [18]
Posted by Stephen Alexander at 14:42