Freedom In the Age of Coronavirus (Update) 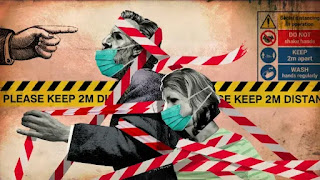 Illustration by Jonathan McHugh (2021)
beepencil.com
Well, how are you enjoying your newly returned freedom post-June 21st? Doesn't feel much like freedom in the old (pre-pandemic) sense, does it?
Even the fully vaccinated who have been jabbed three times (because, who knows, maybe the third time will work like a charm) are still expected to wear masks on public transport, take endless tests for viral infection, and (in parts of the UK) flash Covid passes to gain access to certain venues and services.
And hanging over us all is the threat of what the government calls Plan B - the most sinister plan since Plan 9 was devised in fiendish extraterrestrial minds - involving another Christmas lockdown.
I'm beginning to think that Byung-Chul Han is right to argue that we are living in a peculiar phase of history when our ideal of freedom is paradoxically generating new and unlimited forms of compulsion and constraint:
"Freedom will prove to have been merely an interlude. Freedom is felt when passing from one way of living to another - until this too turns out to be a form of coercion. Then, liberation gives way to renewed subjugation." [1]
As a matter of fact, I didn't need Han to tell me this; D. H. Lawrence was already exposing the Fata Morgana of Liberty a hundred years ago: "She may lead you very definitely away from today's prison. But she also very definitely leads you towards some other prison. Liberty is a changing of prisons [...]". [2]
Of course, Lawrence was never very keen on freedom (in a liberal, individual sense), being more concerned with belonging and fulfilment (in a religious sense), as is clear from the following lines:
"Men are free when they are obeying some deep, inward voice of religious belief. Obeying from within. Men are free when they belong to a living, organic, believing community, active in fulfilling some unfulfilled, perhaps unrealised purpose. Not when they are escaping to some wild west. [...]
Men are not free when they are doing just what they like. The moment you can do just what you like, there is nothing you care about doing. Men are only free when they are doing what the deepest self likes." [3]
I have to admit, I'm uncomfortable with the language Lawrence uses here and prefer to think of freedom precisely in the (nomadic) terms he rejects; as straying and breaking away from all bonds, homelands, and forms of authority.
Interestingly, however, Byung-Chul Han also stresses that freedom is ultimately relational; something which involves being among friends [4]. He writes: "A real feeling of freedom occurs only in a fruitful relationship - when being with others brings happiness. But today's neoliberal regime leads to utter isolation; as such, it does not really free us at all." [5]
Ultimately, we have to ask in closing whether men and women have ever really had the courage for freedom: didn't we invent the Covid-19 pandemic for the same reason we once invented God ...? And don't we carry smartphones for the same reason we once fiddled with rosary beads; to show our devotion and our obedience to the age in which we live [6].
Notes
[1] Byung-Chul Han, Psychopolitics, trans. Erik Butler, (Verso, 2017), p. 1.
For Han, psychic maladies such as depression and burnout are "pathological signs that freedom is now switching over into manifold forms of compulsion" [p. 2].
[2] D. H. Lawrence and M. L Skinner, The Boy in the Bush, ed. Paul Eggert, (Cambridge University Press, 1990), p. 37. Thanks to David Brock for reminding me of what Lawrence writes here.
[3] D. H. Lawrence, Studies in Classic American Literature, ed. Ezra Greenspan, Lindeth Vasey and John Worthen, (Cambridge University Press, 2003), pp. 17-18.
[4] Etymologically, it's true that the words freedom and friendship share a common root in Indo-European languages, so that we might best think freedom as a form of connection to others on the basis of kinship and affection.
[5] Byung-Chul Han, Psychopolitics, p. 3.
Han reminds us also that Marx defined freedom "in terms of a successful relationship to others" [3] (i.e., freedom is synonymous with communism and the bourgeois notion of individual freedom merely a ruse of capital).
Cf. Nietzsche's conception of freedom in Twilight of the Idols, however, which a libertarian friend of mine loves to quote: "Freedom is the will to be responsible for ourselves. It is to preserve the distance which separates us from other men. To grow more indifferent to hardship, to severity, to privation, and even to life itself." ['Expeditions of an Untimely Man', §38.]
For Nietzsche, then, the value of freedom lies not in what it attains for the individual, but in what he or she pays for it - what it costs them. Freedom doesn't make happy - it makes strong and marks an overcoming of self-contempt. The free spirit spurns the contemptible sort of well-being dreamed of by shopkeepers, Christians, cows, etc. and they learn not merey how to love their enemies, but hate their friends.
[6] Byung-Chul Han writes:
"Every [...] technique of domination brings forth characteristic devotional objects that are employed in order to subjugate. Such objects materialize and stabilize dominion. Devotion and related words mean 'submission', or 'obedience'. Smartphones represent digital devotion - indeed, they are the devotional objects of the Digital, period. As a subjectivation-apparatus, the smartphone works like a rosary [...] Both the smartphone and the rosary serve the purpose of self-monitoring and control."
Psychopolitics, p. 12.
To read the earlier post on the subject of freedom for which this forms an update, click here.
Posted by Stephen Alexander at 19:54