If We Could Talk to the Animals 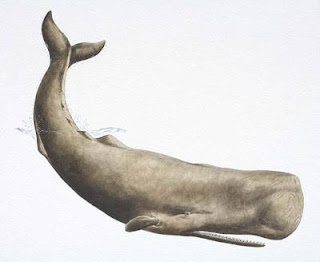 Sperm whale (Physeter macrocephalus)
They say the sea is cold, but the sea contains
the hottest blood of all ... [1]
As far as I recall, even Doctor Doolittle - who, famously, abandoned his human patients in favour of treating animals, with whom he could communicate in their various languages - never spoke to a sperm whale. But, apparently, an interdisciplinary group of scientists may now be close to so doing, with help from AI technology ...
The Cetacean Translation Initiative aims to decode the astonishing variety of clicks and whistles made by sperm whales. If successful, the project would be the first time (outside of fiction) that humans will be able to understand - and presumably employ - the language of another species (if, that is, animal utterances can legitimately be described as a language) [2].
Of course, learning to decipher and communicate in whale-speech isn't going to be easy, even with the most advanced systems of artificial intelligence. But it's an intriguing project and one wonders what Moby Dick might have to tell us ...
Alas, I fear it won't be anything very pleasing to human ears; for I suspect that these huge, intelligent mammals will, like elephants, have long memories and will thus recall the industrial scale slaughter of their kind by man during the last 300 years [3].
Maybe, to paraphrase Nietzsche, they'll accuse us not only of being the most absurd and unfortunate of all animals, but also the cruellest [4].
But maybe, if we're lucky, they'll also teach us something about love ...
Notes
[1] D. H. Lawrence, 'Whales weep not!', The Poems, ed. Christopher Pollnitz, (Cambridge University Press, 2013), pp. 607-08.
This poem can be found online at poets.org: click here. Some readers might recall that the opening two lines were quoted by Capt. Kirk in Star Trek IV: The Voyage Home (dir. Leonard Nimoy, 1986), which features a pair of humpback whales.
[2] Scientists and linguists are still uncertain whether or not animals can be said to truly possess language. For vocalisations can only be called a language if it can be shown that they possess fixed meanings and structures (i.e., without semantics and grammar, you just have a lot of clicks, grunts, squeaks, and squawks).
[3] Although sperm whales are now a protected species and remaining populations are large enough that their conservation status is rated as vulnerable rather than endangered, the recovery from centuries of commercial whaling will be a slow process and it's doubtful the number of whales inhabiting the world's oceans will ever be what it once was.
[4] See Nietzsche, The Gay Science, III. 224.
Musical bonus: 'Talk to the Animals', written by Leslie Bricusse for the film Doctor Dolittle (dir. Richard Fleischer, 1967). Performed by Rex Harrison (as Doolittle), it won the Academy Award for Best Original Song and has been recorded by numerous artists, including Andy Williams, Tony Bennett, and Sammy Davis Jr.
Click here to listen to Bobby Darin's take on the song, from the album Bobby Darin Sings Doctor Doolittle, (Atlantic Records, 1967).
Posted by Stephen Alexander at 07:32