Survival in the Age of Coronavirus 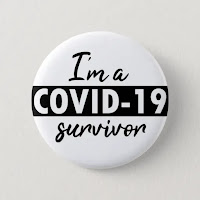 Button badge designed by Inspirer et Motiver
zazzle.com
I.
I'm pleased to see that the philosopher and cultural critic Byung-Chul Han addresses the coronavirus pandemic within the context of his work on what he terms the palliative society (i.e., society characterised by a generalised fear of pain - or, indeed, any form of negativity that might possibly cause suffering or distress) [a].
Pleased, not only because I think what he says is insightful, but because I think it important that heretics [b] speak up and challenge the prevailing Covid orthodoxy which governments, medical bodies, and the mainstream media are all promoting in order to justify the destruction of individual rights and liberties in the name of public health.
II.
According to Han, Covid-19 reveals what kind of society we belong to; one in which survival has become an absolute value and where all forces are marshalled "for the prolongation of life" [14] at any cost.
He writes:
"In the pandemic, the bitter fight for survival is subjected to a viral intensification. The virus enters the palliative zone of well-being and turns it into a quarantine zone in which life is completely paralysed into survival. The more life becomes survival, the greater the fear of death. Algophobia is utimately thantophobia. The pandemic makes death, which we had carefully repressed and set aside, visible again. The prominence of death in the mass media makes people nervous." [14]
That's true: there are people who terrify themselves reading the latest daily updates on infection levels, hospitalisations, and deaths; not just in their local area, but nationally and even globally. They seem to have lost all sense of perspective or context and treat even a tiny rise in the number of people dying with (and not necessarily of) coronavirus as if it were the end of the world, rather than the end of a few individual lives (mostly aged over 80 and very often with serious pre-existing health conditions).
Han writes:
"The society of survival has no sense of the good life. Even enjoyment is sacrificed in the pursuit of health as an end in itself. [...] We are prepared to sacrifice everything that makes life worth living for the sake of survival. In the face of the pandemic, even the restriction of fundamental rights has been accepted without so much as a question being asked. We comply willingly with the state of exception that reduces life to bare life." [14-15]
Bare life: i.e., a socially distanced existence in which we lock ourselves up at home or creep about in masks, regard strangers (and even our own relatives) as potential vectors of disease, and constantly self-test for signs of infection. It is a life divested not only of pleasure, but of all meaning (i.e., lacking in any meta-physical dimension).
We become, in effect, zombies: "A society that is gripped by the mania for survival is a society of the undead [...] too alive to die, and too dead to live" [17].
Notes
[a] See Byung-Chul Han, The Palliative Society, trans. Daniel Steuer, (Polity Press, 2021). All page numbers given in the post refer to this work.
Byung-Chul Han, of course, is not the first author to inveigh against this will to survive. Nietzsche was keen to stress that the will to power was more than merely a will to life and could, in fact, have aims contrary to the wellbeing and survival of the organism. D. H. Lawrence also wrote at length against the unappeased rage of self-preservation; see, for example, his 'Study of Thomas Hardy', in Study of Thomas Hardy and Other Essays, ed. Bruce Steele, (Cambridge University Press, 1985), pp. 3-128.
[b] For a recent post on heresy (as/and philosophical idiotism), click here. Like Han, I conceive of the heretic as a figure of resistance opposing the violence of consensus and the commonly accepted values of their era.
Posted by Stephen Alexander at 15:39