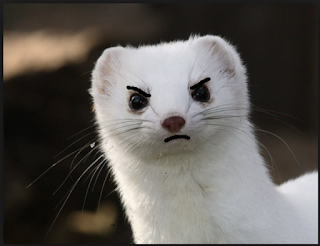 Angry weasel by zee1975
imgur.com
Noli me tangere, touch me not! / O you creatures of mind, don't touch me!
O you with human fingers, O never put your hand on me!
O you with your human bodies, stay a little distance from me! [1]
Whilst it's true that the term touch, along with tenderness, has a privileged role to play within D. H. Lawrence's phallic vocabulary [2], that doesn't mean that he was always comfortable with people putting their paws on him, particularly in an intimate manner that violates his animal integrity.
Thus, in an amusing verse probably written in 1916 [3], the male protagonist is not best pleased when he is told by his lover, a married woman, that he shouldn't be shy or ashamed of his nakedness; that he should allow her to see and touch and enjoy his body:
She said to me: What an instrument, your body!
single and perfectly distinct from everything else!
What a tool in the hands of the Lord!
Just as she once handled her father's riding-whip as a child, and his pens - feeling something surge through her when she touched them - now she wished to grab hold of him and possess his male beauty:
I wish I could grip you like the fist of the Lord,
and have you -
This, however, places a constraint upon his heart, leaving him feeling trammelled and hurt. He replies:
No tool, no instrument, no God!
Don't touch me and appreciate me.
It is an infamy.
And then, somewhat astonishingly, he compares himself to an adder lying in the sun, a young bull in a field, and a weasel on a fence:
You would think twice before you touched a weasel on a fence
as it lifts its straight white throat.
Your hand would not be so flig and easy.
What he wants is that she not only recognise his singular beauty, but respect it by hesitating somewhat before reaching forward to caress him. For as Lawrence writes in a later cycle of poems, touch comes slowly, if at all, as a form of trust developing not out of desire, but chastity [4].
That's an important point I think (particularly if one wishes to understand Lawrence's complex notion of touch).
But, arguably, it's even more important to acknowledge what Lawrence is telling us here about wild animals; that they hate to be stroked, cuddled, picked up, or petted by humans and so we should refrain from trying to touch them in an inappropriately familiar manner if and when we are fortunate enough to encounter them.
If you want to show how much you admire and care for a wild creature, let it be; respect it in its otherness and acknowledge the pathos of distance that exists between you.
Notes
[1] I've slightly altered the opening lines from D. H. Lawrence's poem 'Noli me tangere', The Poems, Vol. I, ed. Christopher Pollnitz, (Cambridge University Press, 2013), pp. 406-07. Italics added.
[2] See Annabel Banks, 'Voli Me Tangere: Touch and Tenderness in the Lady Chatterley Novels', Postgraduate English - a Journal and Forum for Postgraduates in English hosted by Durham University - No. 32 (2016). Readers who wish to dowload the full text as a pdf should click here.
[3] The poem, 'She Said As Well to Me', is part of the collection Look! We Have Come Through! and can be found in D. H. Lawrence, The Poems, Vol. I, pp. 208-09. It can also be found online: click here.
[4] See the Pansies 'Chastity', 'Let us talk, let us laugh', and 'Touch comes', in The Poems, Vol. I, pp. 407-09. And for a follow on post to this one in which I discuss the idea of chastity in Lawrence (and Nietzsche), click here.
This post is for animal rights activist and Lawrentian David Brock.
Posted by Stephen Alexander at 09:24

Email ThisBlogThis!Share to TwitterShare to FacebookShare to Pinterest
Labels: d. h. lawrence, she said as well to me, touch, weasel, wild animality