On Human Nakedness as Seen by Animals 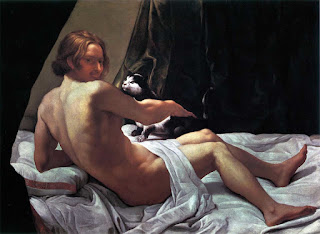 Giovanni Lanfranco:
Giovane nudo sul letto con un gatto (c. 1620-22)
Oil on canvas (112 x160 cm)
I often ask myself who I am at that moment when I'm caught naked
by the silent gaze of an animal; for example, the eyes of a cat ... [1]
Do animals understand that we are wearing clothes? Or, to put it another way, do they know when we are naked?
D. H. Lawrence suspected his favourite brown hen would, if she could, address him as Mr. Skinflappy:
"Skin-flappy, of course, would refer to my blue shirt and baggy cord trousers. How would she know I don't grow them like a loose skin!" [2]
How indeed, being only a chicken?
But what about a cat? For I'm assuming that a cat is more insightful than a chicken when it comes to this question [3] and must surely sense the difference between skin and cloth and know when its human is in the nip?
Didn't Derrida discover this for himself when his cat [4], having wandered into the bathroom, exposed the philosopher's nakedness and caused him to experience a feeling of embarrassment or shame? [5]
As Derrida points out, at such moments we are transported back to that moment in Genesis [3:7] when, post-Fall, Adam and Eve know themselves to be naked not only in the eyes of God and each other, but the serpent and all the other animals that inhabited the garden (and so quickly cover themselves with fig leaves).
As Nietzsche concludes, when the animals look at man - particularly as he stands naked before them on two bare legs - they do not see a creature that is separate and superior; rather, they see "a being of their own kind which has in a most dangerous manner lost its sound animal reason" [6] and is physically maladapted to the world (lacking in speed, in strength, in sharp teeth and fur).
That's man: the mad animal, the vulnerable animal, and the naked animal ill at ease in its own skin ...
Notes
[1] I'm quoting from memory (so have doubtless not quite got it right) a line by Jacques Derrida in 'The Animal That Therefore I Am (More to Follow)', trans. David Wills, Critical Inquiry, Vol. 28, No. 2, (The University of Chicago Press, 2002), pp. 369-418. Click here to access on JSTOR.
[2] D. H. Lawrence, 'Him With His Tail in His Mouth', in Refections on the Death of a Porcupine and Other Essays, ed. Michael Herbert, (Cambridge University Press, 1988), p. 316.
[3] Actually, my love of cats might be causing me to be unfair to chickens. For according to a study into their intelligence by a professor at Bristol University in 2013, chickens can not only outperform cats and dogs in several tests of cognitive and behavioural ability, but even four-year-old children.
[4] Like Foucault and Deleuze, Derrida had a much-loved feline companion; see my post from January 2018 - 'When I Play With My Cat' - click here. In 'The Animal That Therefore I Am (More to Follow)', Derrida is at pains to stress that when he speaks of a female cat staring at his nakedness in the bathroom, he is referring to an actual creature in all its unique singularity:
"I must make it clear from the start, the cat I am talking about is a real cat, truly, believe me, a little cat. It isn't the figure of a cat. It doesn't silently enter the room as an allegory for all the cats on the earth, the felines that traverse myths and religions, literature and fables." [374]
[5] Again, see Derrida's 'The Animal That Therefore I Am (More to Follow)', op. cit., where he confesses:
"I have trouble repressing a reflex dictated by immodesty. Trouble keeping silent within me a protest against the indecency. Against the impropriety that comes of finding oneself naked, one's sex exposed, stark naked before a cat that looks at you without moving, just to see. The impropriety [malséance] of a certain animal nude before the other animal [...] the single, incomparable and original experience of the impropriety that would come from appearing in truth naked, in front of the insistent gaze of the animal, a benevolent or pitiless gaze, surprised or cognizant. [...] It is as if I were ashamed, therefore, naked in front of this cat, but also ashamed for being ashamed." [372]
[6] Nietzsche, The Gay Science, Book III, §224. This is my translation of the line. The section, entitled Kritik der Thiere ['Critique of the Animals'], reads in full and in the original German:
"Ich fürchte, die Thiere betrachten den Menschen als ein Wesen Ihresgleichen, das in höchst gefährlicher Weise den gesunden Thierverstand verloren hat, - als das wahnwitzige Thier, als das lachende Thier, als das weinende Thier, als das unglückselige Thier."
Posted by Stephen Alexander at 14:05