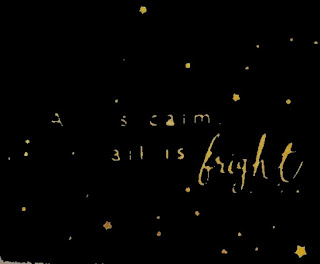 Stille Nacht, heilige Nacht
I.
What, more than anything, do we need to rediscover this Christmas in order to release us from the anxiety, the noise, the frenzy, and the coarseness of life in 2021?
The answer is the kind of life hinted at within the popular Christmas carol Silent Night - a life wherein all is calm and we can sleep in heavenly peace; i.e., collect ourselves, gather our senses, and know a sense of blissful conclusion, rather than empty duration in which no rest is possible; a life wherein we understand that even the darkness is, paradoxically, bright.
II.
Composed in 1818 by Franz Xaver Gruber - with lyrics by Joseph Mohr [1] - Silent Night not only holds out the (in my view false) promise of Christian redemption, but speaks of a time which is now lost to us, one in which each day begins and ends in prayer and the year is marked by holy days and festive events.
As Byung-Chul Han notes:
"The medieval calendar did not just serve the purpose of counting days. Rather, it was based on a story in which the festive days represent narrative resting points. They are fixed points within the flow of time, providing narrative bonds so that the time does not simply elapse. The festive days form temporal sections which structure time and give it a rhythm. They function like the sections of a story, and let time and its passing appear meaningful. Each section of a story completes a narrative section, and this provisional completion prepares the next stage of the narrative. The temporal sections are meaningful transitions within an overall narrative frame. The time of hope, the time of joy, and the time of farewell merge into each other." [2]
Of course one has reservations about all this - but then so too does one have reservations about living (and perishing) in the Un-Zeit [3] of today when life has lost "more and more of the breadth that would give it duration [... and] become more rushed, less perspicuous and more directionless" [4].
Sadly, in the 24/7 world of non-time, there can be no silent night, holy night, when all is calm, all is bright; and we can never sleep in heavenly peace ...
Notes
[1] The English translation of Stille Nacht was written by John Freeman Young in 1859, based on three of Mohr's original six verses. In 1998, the Silent Night Museum (in Oberndorf) commissioned a new English translation by Bettina Klein of the German lyrics. For the most part, Klein leaves the Young translation unchanged, but occasionally it differs significantly in order to be more faithful to the original text.
As for the melody that is generally used today - a slow meditative lullaby  - this differs only slightly from Gruber's original.
[2] Byung-Chul Han, The Scent of Time, trans. Daniel Steuer, (Polity Press, 2017), p. 88.
D. H. Lawrence puts this idea in more poetic (and openly religious) terms:
"The rhythm of life itself was preserved by the Church hour by hour, day by day, season by season, year by year, epoch by epoch [...] We feel it, in the south, in the country, where we hear the jangle of bells at dawn, at noon, at sunset, marking the hours with the sound of mass or prayers. It is the rhythm of the daily sun. We feel it in the festivals, the processions, Christmas, the Three Kings, Easter, Pentecost, St John's Day, All Saints, All Souls. This is the wheeling of the year, the movement of the sun through solstice and equinox, the coming of the seasons, the going of the seasons. And it is the inward rhythm of man and woman too, the sadness of Lent, the delight of Easter, the wonder of Pentecost, the fires of St John, the candles on the graves of All Souls, the lit-up tree of Christmas, all representing kindled rhythmic emotions in the souls of men and women."
See: A Propos of 'Lady Chatterley's Lover', in Lady Chatterley's Lover and A Propos of 'Lady Chatterley's Lover', ed. Michael Squires, (Cambridge University Press, 1993), pp. 322-23.
[4] Byung-Chul Han's translator Daniel Steuer notes that 'non-time' is a neologism with the stress on the prefix which "expresses a negation that turns something positive or neutral into something negative". He continues: "'Non-time' and its derivatives [...] do not refer so much to an inopportune moment, or an anachonism, but to a particular modality of time itself". See note 1 to chapter 1 of Byung-Chul Han's The Scent of Time, pp. 115-16.
We might best summarise the idea by saying that non-time results when life is deprived of every form of meaningful closure (including death); when the present is no longer framed by past and future and is just made up of moments lacking in continuity; "an empty duration without beginning or end", as Han puts it [ibid., p. 7].
[5] Byung-Chul Han, The Scent of Time, p. 11.
Thanks to Louise Tucker for providing the image upon which my illustration is based.
Posted by Stephen Alexander at 08:34