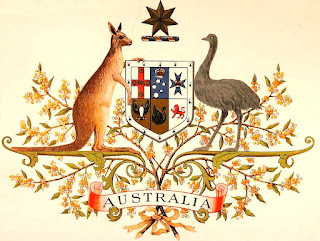 The original 1912 drawing for the Australian coat of arms
Covid mania has sent the entire world crazy in the last two years and many governments have reacted in a senseless and shameful manner. But nowhere is this fascist hysteria in the face of a virus that has killed less than 2,500 of its citizens - the average age of whom is 83 - more astonishing than in Australia ... [a]
Astonishing - and depressing - but not surprising to readers familiar with D. H. Lawrence's novel Kangaroo (1923) [b], which offers a brilliant meditation not only on the queer spirit of place Down Under, but the political psychology of the typical Aussie in times of crisis (be it post-War or mid-pandemic).
According to Lawrence, whilst the Australian bush is beautiful and endlessly fascinating, so too does it possess something threatening about it [c]. Likewise, whilst Australians seem to be some of the friendliest, most easy-going people on earth - free from much of the formality and uptightness that is said to characterise the British - there's a unique mix of resentment and aggressive familiarity behind their superficial charm.
Their fraternal idealism or mateyness is, therefore, something about which one should remain profoundly cautious and in Kangaroo Lawrence "creates and magnifies a sense of subterranean violence ready to burst through the carefree surface of Australian life" [d] that still resonates today as we watch the authorities in God's own country indulge in draconian stupidity with excessive enthusiasm (and popular support).
Who would have thought that a coat of arms bearing a red kangaroo and an emu would one day seem as menacing as one with a lion and a unicorn, or an imperial eagle?
Welcome to 2022 ...
Notes
[a] Readers who are interested in the official Coronavirus case numbers and statistics for Australia can visit their Department of Health website for daily information: click here.
[b] D. H. Lawrence, Kangaroo, ed. Bruce Steele, (Cambridge University Press, 1994). All page references are to this edition of the work that Lawrence wrote (in six weeks) during his hundred day stay in Australia (4 May - 11 August 1922).
Interestingly, when Lawrence arrived Down Under: "It was a period when Sydney was again suffering from a bubonic plague scare: a very mild scare, some fifteen cases to a million people, according to the newspapers.* But the town was placarded with notices 'Keep your town clean', and there was a stall in Martin Place where you could write your name down and become a member of a cleaning league, or something to that effect." [48]
*The May 3rd edition of the Daily Telegraph, for example, reported twenty-seven cases of plague; seven of which were fatal.
[c] Lawrence tells us that the "vast, uninhabited land" [13] frightened the book's protagonist Richard Somers:
"It seemed so hoary and lost, so unapproachable. The sky was pure, crystal pure and blue, of a lovely pale blue colour: the air was wonderful, new and unbreathed: and there were great distances. But the bush, the grey, charred bush. It scared him. As a poet, he felt himself entitled to all kinds of emotions and sensations which an ordinary man would have repudiated. Therefore he let himself feel all sorts of things about the bush. It was so phantom-like, so ghostly, with its tall pale trees and many dead trees, like corpses, partly charred by bush fires: and then the foliage so dark, like grey-green iron. And then it was so deathly still. Even the few birds seemed to be swamped in silence. Waiting, waiting - the bush seemed to be hoarily waiting. And he could not penetrate into its secret. He couldn't get at it. Nobody could get at it. What was it waiting for?
And then one night at the time of the full moon he walked alone into the bush. A huge electric moon, huge, and the tree-trunks like naked pale aborigines among the dark-soaked foliage, in the moonlight. And not a sign of life - not a vestige.
Yet something. Something big and aware and hidden! He walked on, had walked a mile or so into the bush, and had just come to a clump of tall, nude dead trees, shining almost phosphorescent with the moon, when the terror of the bush overcame him. He had looked so long at the vivid moon, without thinking. And now, there was something among the trees, and his began to stir with terror, on his head. There was a presence. He looked at the weird, white dead trees, and into the hollow distances of the bush. Nothing! Nothing at all. He turned to go home. And then immediately the hair on his scalp stirred and went icy cold with terror. What of? He knew quite well it was nothing. [...]
But the horrid thing in the bush! He laboured as to what it could be. It must be the spirit of place. Something fully evoked tonight, perhaps provoked, by that unnatural West-Australian moon. Provoked by the moon, the roused spirit of the bush. He felt it was watching, and waiting. Following with certainty, just behind his back." [14]
I quote this from chapter one at length as a treat for readers unfamiliar with Lawrence's work. Here, he writes in a manner that some might call Lovecraftian. In the final chapter of his novel (XVIII), Lawrence provides another beautiful description of the Australian bush, this time without the sense of horror underneath: see pp. 342 and 353-355.
[d] Bruce Steele, Introduction to Kangaroo, p. xxxii.
This becomes clear when, for example, we witness the pleasure that Jack Callcott gets from breaking the heads of his political opponents with an iron bar and boasting of it afterwards to Somers, with "the strangest grin in the world" on his face and "indescribable gloating joy in his tones" [319].
This post is for Novak Djokovic.
Posted by Stephen Alexander at 10:35