When the Cat Lies Down With the Rat 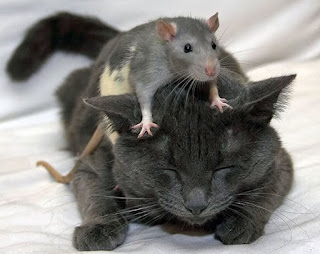 And they shall make a covenant of peace ...
I.
Last night, I had a horrible dream: my cat was lying in the garden on a bright frosty morning, much like this morning, and from under her body I could see a long, hairless tail poking out. Upon investigation, I discovered that a large rat had snuggled beneath her in order to keep warm.
Although aware of the rodent's presence, my cat - normally a serial rat-killer - remained unconcerned. Indeed, she seemed content to rest in harmony with her fellow creature and fulfil Isiah's messianic prophecy [11:6] of a time to come, when there will be universal peace and love and the wolf shall dwell with the lamb; the leopard lie down with the kid, etc.
II.
Now, whilst there are many who share this vision, I remain with D. H. Lawrence on this and regard it as an expression of moral nihilism, in as much as it involves the negation not merely of otherness and opposition, but of existence as founded upon these principles of antagonism and one form of life eternally devouring another (for it's death that makes the world go round).
In 'The Reality of Peace', Lawrence writes:
"Shall I expect the lion to lie down with the lamb? Shall I expect such a thing? I might as well hope for the earth to cast no shadow, or for burning fire to give no heat. [...] When the lion lies down with the lamb he is no lion, and the lamb, lying down with him, is no lamb. They are merely a neutralisation, a nothingness. If I mix fire and water, I get quenched ash. And so if I mix the lion and the lamb. They are both quenched into nothingness." [1]
He continues:
"The lion will never lie down with the lamb; in all reverence let it be spoken. Whilst the lion is lion, he must fall on the lamb, to devour her. This is his lionhood and his peace, in so far as he has any peace. And the peace of the lamb is to be devourable.
Where, then, is there peace? There is no peace of reconciliation. Let that be accepted for ever." [2]
Concluding on a thanatological note:
"It is peace for the lion when when he carries the crushed lamb in his jaws. It is peace for the lamb when she quivers light and irresponsible within the strong, supporting apprehension of the lion. Where is the skipping joyfulness of the lamb when the magnificent, strong responsibility of the lion is removed? The lamb need take no thought; the lion is responsible for death in her world." [3]
Of course, some critics have sneeringly suggested that this is not how an articulate lamb might put it [4].
But then, as Nietzsche points out in the Genealogy [1:13], whilst there is nothing strange about lambs harbouring resentment towards those beasts and large birds of prey that carry them off, that's no reason for us to come over all sheepish and blame the predators for being true to their nature, or to describe that nature in moral terms as evil [5].
Notes
[1] D. H. Lawrence, 'The Reality of Peace', in Refections on the Death of a Porcupine and Other Essays, ed. Michael Herbert, (Cambridge University Press, 1988), p. 49.
[2] Ibid.
[3] Ibid., p. 50.
[4] See, for example, Michael Black who discusses these passages from 'The Reality of Peace' in D. H. Lawrence: The Early Philosophical Works, (Cambridge University Press, 1992), pp. 439-441.
Black argues that whilst it is "one thing to contemplate predation as a fact of nature; it is another to elevate it to a mystic principle which turns immolation into a vocation." [440] It is precisely such mystification - which Lawrence often eroticises in a manner that reinforces gender stereotypes - that introduces deeply troubling elements in Lawrence's later work to do with sexual politics and human sacrifice.
[5] Nietzsche goes on to point out that it is as absurd to expect the powerful not to delight in their strength, as it is for the weak to construe their impotence as a form of freedom and their self-restraint as a moral accomplishment, when they simply lack claws. See On the Genealogy of Morality, first essay, §13.
For a related post to this one, click here.
Posted by Stephen Alexander at 18:08

Email ThisBlogThis!Share to TwitterShare to FacebookShare to Pinterest
Labels: antagonistic opposition, bible studies, d. h. lawrence, nietzsche, on the genealogy of morality, the lion and the lamb, the reality of peace