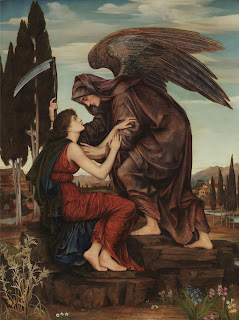 Evelyn De Morgan: The Angel of Death (1880)
demorgan.org.uk
Sweet, beautiful death, come to our aid.
Give us a chance to escape this foul prison in which we suffocate.
Sweet death, assert your power now, for it is time.
Death is often personified: sometimes as a deity; sometimes as an angel; sometimes as a robed skeleton, pale horseman, or even as a type of lover who comes with a kiss. But whatever form death is thought to take, it holds out for many not merely the promise of a permanent and irreversible cessation of all biological functions, but the hope of an escape ...
Thus, it's not surprising to discover people invoking death (either for themselves or for others) when life has become a mechanical round that makes it difficult "to know or admit the new creative desires that come upon us" [a], or even get up in the morning without a feeling of extreme weariness:
"We cling tenaciously to the old states, we resist our own fulfilment with a perseverance that would almost stop the sun in its course. But in the end we are overborne." [27].
That's pretty much how I feel at the moment: overborne (i.e., overcome by emotional pressure and physical exhaustion) and at the point where I'm tempted to invoke death and destruction: "If we cannot cast off the old habitual life, then we bring it down over our heads in a blind frenzy." [27]
The hope - which may or may not be justified, may or may not be false - is that:
"When we have become very still, when there is an inner silence as complete as death, then, as in the grave, we hear the rare, superfine whispering of the new direction; the intelligence comes. After the pain [...] of our destruction in the old life comes the inward suggestion of fulfilment in the new." [28]
Of course, in order to become still in this manner it might be vital that others die first - and not in a poetic-metaphorical manner, but in a prosaic, all-too-literal fashion. It's all well and good giving oneself up to the river of peace that bears us and abiding by the incalculable impulse of creation, but if that river is blocked by those who can no longer fully live, but nevertheless refuse to die and pass into the unknown, then ...
Well, then there's a problem. And although from a conventional moral perspective it seems wrong to wish for the death of others, it is sometimes necessary. Necessary also to acknowledge that "not all life belongs to life" [40], nor does all life progress towards a state of transcendent being; for many old people who live on and on, year after year, there is no possibility of coming to blossom.
They live on the dead body of the past and on the blood of their children, seemingly lacking the strength (the courage, or the desire) for  the impulse of death that would transport them into darkness and absolution.
Their life, says Lawrence, is "a slow lapsing out, a slow inward corruption" [41] and they have their being in dementia and decay. Their mouths may remember how to chew and their bowels may still (with the help of a little lactoluse) pass stools, but they lapse further and further into nullity, dragging those who provide care with them [b].
And so one invokes death ...
But it's more in desperation than anything else, as I don't actually have much faith in the power of prayer, etc. Indeed, I'm not even sure it does any good in writing posts like this one and thinking of the living dead. For as Lawrence notes: "The thought of them is almost as harmful as their presence." [45]
Notes
[a] D. H. Lawrence, 'The Reality of Peace', in Reflections on the Death of a Porcupine and Other Essays, ed. Michael Herbert, (Cambridge University Press 1988), pp. 25-52. The line quoted from here is on p. 27. Future page references will be given directly in the text.
[b] This isn't a rare occurrence: there are 1.6 million people in the UK aged 85 and over, many of whom have dementia and require full-time care; something that often falls on to family members. In one of the Pansies, Lawrence writes:
The old ones say to themselves: We are not going to be old,
we are not going to make way, we are not going to die,
we are going to stay on and on and on and on
and make the young look after us
till they are old.
This sounds terrible. And it is terrible. But, unfortunately, it's also true. Of the 7 million people acting as carers in the UK, 1.3 million are themselves aged 65 or over.
See 'The grudge of the old', in The Poems, Vol. I, ed. Christopher Pollnitz, (Cambridge University Press, 2013), p. 436.
This post is for Heide Hatry with whom I discussed the idea.
Posted by Stephen Alexander at 15:20

Email ThisBlogThis!Share to TwitterShare to FacebookShare to Pinterest
Labels: caring for the elderly, d. h. lawrence, evelyn de morgan, thanatology, the angel of death, the grudge of the old, the reality of peace