On Chthonic Vitalism 1: In the Etruscan Tombs With D. H. Lawrence 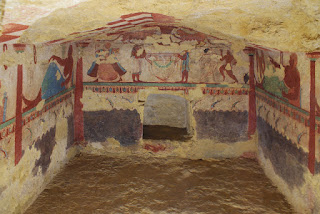 Man lives naked and glowing on the surface of the Earth.
Then comes death and he departs into the Underworld.
I.
D. H. Lawrence was instinctively attracted to the ancient Etruscans for several reasons, not least of all because nobody knows much about them, so he was free to speculate imaginatively and project his own ideas of phallic consciousness upon them.
Indeed, it might be argued that his Sketches of Etruscan Places [a] tell us more about Lawrence and his (anti-Roman, anti-Fascist) political philosophy than about the Etruscans themselves.
But that's okay: for one still discovers much of interest from this trip round the subterranean tombs with Mr Lawrence as our tour guide and, besides, who simply wants object lessons about vanished races?
II.
And it is, dear reader, into the tombs we must descend. For the Etruscans built their cities of wood and these have "vanished as completely as flowers" [13]. Only the tombs, lying like bulbs underground, remain ...
However, fear not, for as subterranean cities of the dead go, the Etruscan one is really quite gay. As Lawrence reminds us, the idea of a gloomy underworld only begins with moral idealism; for nature-loving pagans the afterlife was pretty much more of the same:
"It was neither an ecstasy of bliss, a heaven, nor a purgatory of torment. It was just a natural continuance of the fulness life." [19]
Perhaps that explains why the Etruscan tombs feel so welcoming; the dead left a joyous feeling behind them, which, says Lawrence, is "warm to the heart, and kindly to the bowels" [16]. So there is no need to feel anxious or oppressed, dear reader, as we descend into the Etruscan underworld:
"There is a simplicity, combined with a most peculiar, free-breasted naturalness and spontaneity in the shapes and movements of the underworld walls and spaces, that at once reassures the spirit." [19]
II.
The key thing, however, that we learn from Lawrence's musings on the Etruscans, is that they subscribed to what we might term a chthonic vitalism and extracted their own being out of the dark fissures of the earth that are now sealed to us moderns:
"It is as if the current of some strong different life swept through them, different from our shallow current today: as if they drew their vitality from different depths, that we are denied." [56]
Lawrence insists that the Etruscans conceived everything - even death - in terms of life. But, I think it might also be argued that, in a sense, they viewed life (to paraphrase Nietzsche) as simply a rare and unusual way of being dead [b].
For it's certainly true, as Lawrence concedes, that the tombs reveal the vivid feeling of delight which the Etruscans experienced when contemplating that mysterious journey out of life and "into the dark of death" [58]; a journey Nietzsche describes as a festive return to the actual [c].
The Etruscans weren't particularly concerned with the human soul, but with the material forces and powers which produced the human soul "out of chaos, like a flower, only to disappear again into chaos, or the underworld" [122].
And it's this which makes the Etruscans - to me as a thanatologist - of real interest; theirs, as the Italian philosopher Giorgio Agamben says, was a chthonic civilisation par excellence ... [d]
Notes
[a] Originally published in 1932 as Etruscan Places, I'm relying here on the 1992 Cambridge edition ed. Simonetta de Filippis, entitled Sketches of Etruscan Places and Other Italian Essays. Page numbers given in the post refer to this edition.
[b] See Nietzsche, The Gay Science, Book III, 109.
[c] See Nietzsche, KSA 9:11 [70].
[d] See Agamben's text entitled 'Gaia and Chthonia' in Where Are We Now? trans. Valeria Dani, (ERIS, 2021), pp. 105-113. I discuss this work in the second post on the theme of chthonic vitalism: click here.
Posted by Stephen Alexander at 18:49