Guards! D. H. Lawrence and the Potency of Men 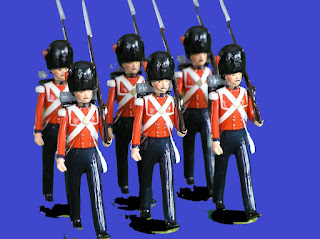 Guards erect with breasts bright red
and the skins of bears upon their head
All the nice girls love a sailor, so they say [1].
But for D. H. Lawrence, it's all the king's soldiers who catch his eye; especially those guards marching stiffly in red tunics and black busbies in whom phallic pride and sun glory is manifest in equal measure.
This is made clear in the early poem 'Guards' [2], where he writes of smouldering soldiers with dark eyes and closed warm lips who advance upon him in a soft-impulsive but somewhat threatening manner, like a wave, before then turning, leaving him to admire their burning shoulders in retreat.
The encounter is clearly, for Lawrence, one with homoerotic overtones. I don't agree with everything that Gregory Woods writes, but it's hard to argue with his claim that in the section of 'Guards' entitled 'Evolution of Soldiers', "their apparent evolution is similar to that of a penis, through tumescence and detumescence" [3].
Expanding on his theme, Woods continues:
"Perspective causes each man to seem to grow as he approaches with red tunic, black busby and 'dark threats'. He passes 'above us', in the classic position of sexual advantage. At 'ebb-time', when the group has just passed by, its phalluses remain erect for a glorious moment, before subsiding." [4]
II.
Almost twenty years later, and Lawrence is still thinking of the soldiers in Hyde Park he saw in the summer of 1909.
In a letter sent to Harry Crosby in 1928, he encloses an extended version of 'Guards' - one with an unpublished third section which describes the soldiers as a "column of flesh erect and painted vermillion" and as "Sun-dipped men [...] all blood-potent", who have come together in their maleness [5].
Again, you don't need to be an expert in queer studies to appreciate that this verse is invested with erotic desire for the male body: "And the male body is the symbol of its own sexual focus, the phallus." [6]
Thus, whilst there is "no questioning the fact that his art is primarily hetero-erotic in intention" [7], Lawrence also loves daydreaming about the potency of men and phallic heroes dipped in scarlet.
Notes
[1] "Ship Ahoy! (All the Nice Girls Love a Sailor)" is an English music hall song from 1908, written by Bennett Scott and A. J. Mills. The song was first performed by male impersonator Hetty King.
[2] D. H. Lawrence, 'Guards!', in The Poems, Vol. I, ed. Christopher Pollnitz, (Cambridge University Press, 2013), pp. 34-35.
As Pollnitz notes: "DHL regularly visited Hyde Park, in central London. He planned to take Louie Burrows there in July 1909 as he had Jessie Chambers on an earlier visit [...]." See The Poems, Vol. II, ed. Christopher Pollnitz, (Cambridge University Press 2013), p. 843. Whether either young woman was particularly interested in seeing soldiers on parade, I don't know, but Lawrence adored the spectacle of erect young men in uniform marching past.
[3] Gregory Woods, Articulate Male Flesh: Male Homo-eroticism and Modern Poetry, (Yale University Press, 1987), p. 130.
[4] Ibid.
[5] See Lawrence's letter to Harry Crosby [30 April - 1 May 1928], in The Letters of D. H. Lawrence, ed. James T. Boulton and Margaret H. Boulton, with Gerald M. Lacy, (Cambridge University Press, 1991), pp. 388-390. The third part of 'Guards' is entitled 'Potency of Men' and consists of five rhyming quatrains. It is reproduced in full on pp. 388-89 from Lawrence's MS.
[6] Gregory Woods, Articulate Male Flesh, pp. 130-31.
[7] Ibid., p. 137.
To read a sister post to this one, on Lawrence's extended version of the poem 'Gipsy' contained in the Crosby letter, click here.
Posted by Stephen Alexander at 07:07