On Chthonic Vitalism 2: In the Etruscan Tombs with Giorgio Agamben 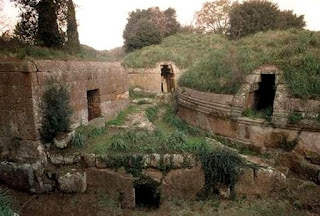 Etruscan tombs (Tarquinia)
The aim of those who practice philosophy in the Etruscan manner is to learn how to die.
I.
For D. H. Lawrence, the Etruscans conceived of everything in terms of life - even death [a].
But the Italian philosopher Giorgio Agamben sees things the other way round; for him, the Etruscans conceived everything in terms of death - even life - and their civilisation was (whilst vital) fundamentally chthonic in character.
This is evidenced by the fact that although the Etruscans chose to build their homes on sites which were ostensibly above ground, they chose to dwell in a more profound sense in the vertical depths: "Hence the Etruscan taste for caves and for recesses dug into the rock, and their preference for tall ravines, gorges, and the steep walls of peperino [...]" [b]
Those who visit the tombs, writes Agamben, "immediately perceive that the Etruscans inhabited Chthonia, and not Gaia" [109] and that they had their true being in the underworld - were epichthonioi as the Little Greek would say - and not on the surface of the Earth facing skywards. Agamben writes:
"The uniquely subterranean character of these Etruscan spaces can also be expressed, when comparing them to other areas of Italy, by saying that what we are seeing is not landscape as such. The affable, familiar landscape that we can serenely embrace with our gaze and which overruns the horizon belongs to Gaia. In chthonic verticality, however, the landscape vanishes; every horizon disappears and makes way for the nefarious, unseen face of nature." [110]
II.
It's not that Lawrence is wrong exactly to stress, as he does, the vitalism of the Etruscans, it's just that he fails to emphasise the chthonic nature of this vitalism. Agamben is spot on to write of this fascinating people with iron in their soul:
"They did not love death more than life, but life was for them inseparable from the depths of Chthonia; they could inhabit the valleys of Gaia and cultivate her countryside only if they did not forget their true, vertical dwelling." [110-111]
This is why the tombs hollowed out in the naked rock do more than merely house the dead and allow us to imagine how the Etruscans conceived of the afterlife; they also allow us to more profoundly understand "the movements, the gestures, and the desires of the living people who built them." [111]
The reason that the Etruscans "built and protected the dwellings of their dead with such assiduous care" [110], was because of their "unshakable chthonic dedication (rather than, as one might assume, their chthonic dedication arising from their care for the dead)" [110].
They understood - in a way that most modern people do not - that life only exceeds mere existence and flowers into the fourth dimension when it "safeguards the memory of Chthonia" [111].
In other words, because we are mortal, then confronting our own finitude and learning how to live in the knowledge and the shadow of death is the most vital aspect of being human. As Heidegger says: Dasein is essentially a being-towards-death [Sein-zum-Tode] [c].
The Etruscans demonstrated "that there is an intense community and an uninterrupted continuity between the present and the past, and between the living and the dead" [111]. We forget or dismiss our relationship with the underworld, with the realm of matter, with death, at our peril (a point that the New York based German artist Heide Hatry makes repeatedly in her work).
For ultimately, not only must Gaia and Chthonia be understood as inseparable, but the world of the living (the biosphere) "cannot exist without exchange and interaction with the chthonic thanatosphere" [111].
Notes
[a] See the first post in this series on chthonic vitalism - 'In the Tombs With D. H. Lawrence' - click here.
[b] Giorgio Agamben, 'Gaia and Chthonia', in Where Are We Now? trans. Valeria Dani, (ERIS, 2021), p. 110. Future page references will be given directly in the post.
[c] See Martin Heidegger, Being and Time, Division II, chapter 1.
Posted by Stephen Alexander at 11:42