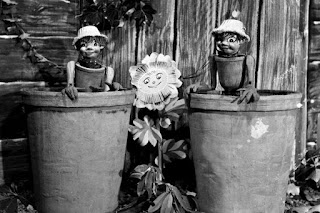 Bill and Ben, the Flower Pot Men, with their female friend Little Weed
To watch a short clip of this BBC TV classic - with or without your mother - click here
I.
In a very real sense, I belong to what might be termed the Watch with Mother generation (i.e., those whose televisual imagination was formed during the black and white days of the 1950s and 60s). And I remain grateful still to Freda Lingstrom and Maria Bird for the programmes they created; some of my happiest (and earliest) memories are of Andy Pandy, The Woodentops, and the Flower Pot Men.
So it's entirely possible, then, that my love for wild plants is a result of my pre-school fascination with Little Weed, who used to feature (and grow) alongside Bill and Ben in the last of these shows; of indeterminate species, but with a lovely smiling face.
II.
According to a statement on the Havering Council website, the spraying of (the possibly carcinogenic) weed killer glyphosate across the borough in every crack and crevice, is justified because alternative measures have been deemed ineffective and more expensive, and necessary because weeds "growing between paving slabs or along the edge of the road visually impact on an area and  [...] cause damage to property".
Thus, from March through to November, "steps are taken to remove weeds and prevent growth".
Although this includes some manual suppression (i.e. the pulling up of weeds by hand, or cutting them with a strimmer), mostly this involves the herbicidal spraying of public highways and footpaths by a subcontracted private company (SH Goss) four times a year, who cheerfully boast of their long experience in maintenance of the environment via the killing of wild plants.
III.
I'm sure there are other residents who are unhappy about this - if only because they are concerned about the health implications for themselves, their children, and their pets.
But mostly, I suspect the residents of Havering are happy to see little green weeds and colourful wild flowers pulled up or poisoned. Indeed, I watch my neighbours regularly conducting chemical warfare and utilising high pressured pumps in order to protect their driveways from the unwanted intrusion of life.
However, as I've said many times before on Torpedo the Ark, whilst brute force crushes many little plants, they always rise again and, ultimately, "the pyramids will not last a moment, compared with the daisy".*