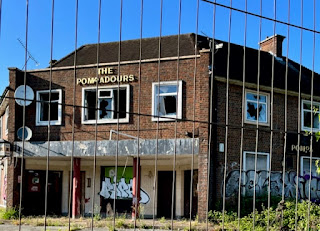 My local boozer, The Pompadours -
and some Lawrence scholars find the Sun Inn, Eastwood, a bit rough ...
Harold Hill is a long way removed (in every sense) from the fictional mining village of Tevershall, which Lawrence imagines in his novel Lady Chatterley's Lover (1928).
And of course, I'm no Oliver Mellors, the ex-soldier turned gamekeeper who strides through the pages of the above in his dark green trousers "with a red face and red moustache" [1], angry at the world.
Having said that, sometimes when walking around the postwar housing estate on the far north-eastern fringes of Greater London that is Harold Hill [2], I'm tempted to tell the natives - whom my mother always disparagingly called Cockneys - something similar to what Mellors wishes to tell the working men and women of Tevershall:
"'I'd tell 'em: Look! look at yerselves! One shoulder higher than t'other, legs twisted, feet all lumps! What have yer done ter yerselves [...] Spoilt yerselves an' yer lives. [...] Take yer clothes off an' look at yerselves. Yer ought ter be alive an' beautiful, an' yer ugly an' half dead.'" [3]
Of course, I'd not say this with a broad East Midland's accent.
And I can't blame the degenerate condition of the locals on years of hard physical toil - on the contrary, it's the fact that many of them don't work (or exercise) that's the problem; that they prefer vegetating on the sofa watching Netflix, eating junk food delivered to their doors, driving even the shortest distance, rather than walk a few hundred yards.
To paraphrase Mellors: Their spunk's gone dead - e-scooters and mobile phones and cannabis suck the last bit out of them. Which is a shame, but there you go.
I won't bore readers with statistics, but the stats for the London Borough of Havering when it comes to things like health don't make for happy reading. Obesity, for example, is the norm; if the 18th-century Essex grocer Edward Bright were alive today and decided to ply his trade at Hilldene shops, no one would blink an eye at his great girth.
People down south often like to joke that it's grim up north, but, believe me, it's fucking grim on Harold Hill too [4].
Notes
[1] D. H. Lawrence, Lady Chatterley's Lover, ed. Michael Squires, (Cambridge University Press, 1993), p. 46. For a full description and character analysis of Oliver Mellors, see my post of July 2020: click here.
[2] Readers interested in knowing more about Harold Hill are reminded of the post published on 28 May 2016 entitled 'And No Birds Sing': click here.
[3] D. H. Lawrence, Lady Chatterley's Lover, p. 219.
[4] And if you don't believe me, see the report in the Romford Recorder which revealed that whilst Havering is home to some extremely affluent neighbourhoods, six roads in Harold Hill have been classed by the UK government as among the most deprived in all England: click here.
Posted by Stephen Alexander at 18:35