Reflections on the Verb to Be 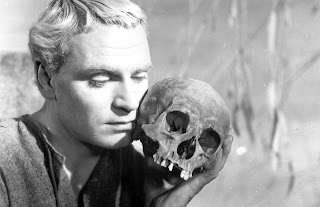 To stamp Becoming with the character of Being -
that is the supreme will to power ... Nietzsche
I've seen it said that fascism begins with the verb to be. And, in fact, I may even have used the phrase myself in order to conclude a past post with a polemical punch line [1]. Whether it's true or not is, of course, debatable.
However, it's certainly the case that false (and often pernicious) beliefs derive from mistaken values that are rooted in language rather than any underlying reality; something that Nietzsche demonstrates in his writings on metaphor and grammar (the latter defined as the presence of God within language) [2].
Thus it is that I'm extremely wary of anyone who in wishing to declare their existence or express their identity asserts: I am (X,Y, or Z) in an ontologically sincere manner (i.e., unaware of the game they're playing).
And I really loathe that Broadway musical number composed by Jerry Herman and famously recorded by Gloria Gaynor - I Am What I Am [3] - and which has since become a global gay anthem, regrettably reinforcing (the paradox and irony of) queer essentialism and the even more regrettable consequences that follow from the belief that sexual identities are innate and come with certain immutable characteristics or necessary attributes.
I can't help thinking that such idealism gives rise to all kinds of reductive, reified, discriminatory, and extremist ideologies - which returns us to where we began: fascism begins with the verb to be. Which is unfortunate, particularly if D. H. Lawrence is right and Hamlet's question is still the one that preoccupies us and the ache for being remains the ultimate hunger [4].
Still, as every good ascetic will tell you, there's no need to heed every ache and pain and surrender to every yearning; I seem to recall that Aleister Crowley once adopted the admirable practice of cutting his arm with a razor every time he said 'I' and took false pride in this word [5].
Notes
[1] Actually, it was the recently published post of 1 August 2022 - 'Dead Dreams Fly Flags' - click here.
[2] See Twilight of the Idols, where Nietzsche writes: "I am afraid we are not rid of God because we still have faith in grammar." Walter Kaufmann's translation of this text can be found in The Portable Nietzsche, ed. Walter Kaufmann, (Penguin, 1982), p. 483.
[3] 'I Am What I Am' was a song featured in Jerry Herman's Broadway musical La Cage aux Folles (1983). It was recorded by disco queen Gloria Gaynor and released as single in the same year, quickly becoming one of her biggest hits. The song also appears on the 1984 album I Am Gloria Gaynor (Silver Blue Records). Click here to watch Ms Gaynor perform a live version of the song at an awards ceremony in Germany in December 1984.
[4] See D. H. Lawrence, 'Manifesto', in The Poems, Vol. I, ed. Christopher Pollnitz, (Cambridge University Press, 2013), p. 218.
[5] In 1920, Crowley and followers moved to Sicily and founded a community that would operate on the principles set out in The Book of the Law. The Abbey of Thelema, as it was known, was basically a restored farmhouse, not far from the beach and next to the ruins of an ancient Roman temple. Here, daily rituals were performed and all social conventions abandoned. Any one who used the word 'I' was obliged, like the Great Beast himself, to self-administer a cut on their forearm with a razor blade. It's possible that this practice was inspired by Crowley's reading of Nietzsche and that his hope was that Thelemites might resurrect the greater intelligence of the body, which does not speak its selfhood, but, rather, physically enacts or performs it.
See 'Of the Despisers of the Body', in Part One of Thus Spoke Zarathustra.
Posted by Stephen Alexander at 16:16

Email ThisBlogThis!Share to TwitterShare to FacebookShare to Pinterest
Labels: aleister crowley, being, d. h. lawrence, essentialism, gloria gaynor, hamlet, i am what i am, jerry herman, nietzsche, philosophy of language