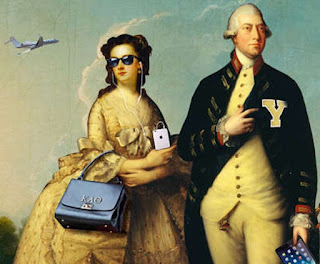 Image (detail) from the front cover of
The Economist (Jan 24-30, 2015)
I.
If you were to ask me to name the thing that artists value most, I might say inspiration. Or a wealthy patron.
But, according to D. H. Lawrence, the prédilection d'artiste is for the singular individual who dares to become who they are. This fascination for those men and women who - as Zarathustra would say - give birth to the dancing star of themselves is rooted deeply in every creative soul [1].
Lawrence calls these rare individuals aristocrats, but is at pains to stress that he is speaking only of those with innate virtue and tremendous self-discipline, rather than members of an elite (but decadent and artificial) social class who have simply been born with proverbial silver spoons in their gobs.
II.
It is, of course, a fantasy of the nineteenth-century philosophical imagination that there exist such natural aristocrats.
Interestingly, however, whilst it's an idea usually associated with figures on either the reactionary or radical right - from Edmund Burke to Friedrich Nietzsche - it's one which also appealed to Thomas Jefferson, who developed the concept in a letter to John Adams:
"I agree with you that there is a natural aristocracy among men. The grounds of this are virtue and talents. Formerly bodily powers gave place among the aristoi. But since the invention of gunpowder has armed the weak as well as the strong [...] bodily strength, like beauty, good humor, politeness and other accomplishments, has become but an auxiliary ground of distinction."
"The natural aristocracy I consider as the most precious gift of nature for the instruction, the trusts, and government of society. And indeed it would have been inconsistent in creation to have formed man for the social state, and not to have provided virtue and wisdom enough to manage the concerns of the society. May we not even say that that form of government is the best which provides the most effectually for a pure selection of these natural aristoi into the offices of government?"
In contrast, Jefferson condemns the artificial aristocracy, founded on wealth and birth and without either virtue or talents, expressing his hope that within a democratic system their power will be curtailed:
"The artificial aristocracy is a mischievous ingredient in government, and provision should be made to prevent it's ascendancy. [...] I think that to give them power in order to prevent them from doing mischief, is arming them for it, and increasing instead of remedying the evil. [...] I think the best remedy is exactly that provided by all our constitutions, to leave to the citizens the free election and separation of the aristoi from the pseudo-aristoi, of the wheat from the chaff. In general they will elect the real good and wise." [2]
Sadly, as we all know, the United States didn't become wisely governed by a natural aristocracy; it quickly grew, rather, into a rapacious plutocracy masquerading as a democracy (as discussed in a recent post: click here).
III.
Maybe, we might conclude, Plato was right; those fittest to rule are invariably those who genuinely have no desire to do so. If, every now and then, one such person does drift into politics, it is usually with great reluctance and they feel under constant pressure to justify why they have done so [3].
But we must also point out that this whole idea of a natural aristocracy is untenable. And it's disappointing that by continuing to subscribe to this idea Lawence failed to address the dominant realities of his age and betrayed the radicality of his own work with a series of theo-political speculations on the nature of power and society, etc.
Ultimately, because Lawrence lacked the conceptual categories of analysis appropriate to the twentieth-century, he falls back on metaphors to do with nature and life; metaphors that conveniently (but illegitimately) provided him with justification for his illiberal political ideas, just as they did for Social Darwinists and National Socialists.
Be wary of anyone who attempts to derive social and political values from Nature, or likes to attach the prefix eco- to their work.
For not only is the attempt to disguise noble lie with natural law fraudulent, but, as Keith Ansell-Pearson points out, anyone who tries to draw ethical and intellectual values from the so-called laws of nature - even Nietzsche - is guilty of an anthropomorphic employment of reason that oversteps the bounds of philosophical good taste [4].
Notes
[1] See chapter V of Lawrence's 'Study of Thomas Hardy', in Study of Thomas Hardy and Other Essays, ed. Bruce Steele, (Cambridge University Press, 1985).
For Lawrence's fullest statement on his understanding of aristocracy (natural and otherwise), see the essay 'Aristocracy', in Reflections on the Death of a Porcupine and Other Essays, ed. Michael Herbert, (Cambridge University Press, 1988), pp. 365-376.
One might also like to see the Epilogue to Movements in European History, where Lawrence writes of natural nobility and chapter XVI of The Plumed Serpent, where Don Ramón presents his vision of a Natural Aristocracy ruling the entire world.
[2] The three quotations I select here are all from Jefferson's letter to Adams, written on 28 October, 1813. See The Adams-Jefferson Letters: The Complete Correspondence between Thomas Jefferson and Abigail and John Adams, ed. Lester J. Cappon, (University of North Carolina Press, 1959), Vol. 2, pp. 387-92.
The above letter can be read online in The Founders' Constitution, Vol. 1, Ch. 15, Document 61 (The University of Chicago Press): click here.
[3] Nietzsche describes this as the bad conscience of commanders and argues that only when this has been overcome, will the best want to rule in good faith and happily accept their obligation to do so. See Beyond Good and Evil, V. 199.
[4] See Keith Ansel-Pearson, Viroid Life, (Routledge, 1997), pp. 28-29.
Posted by Stephen Alexander at 18:57