FOMO (Fear of Missing Out) 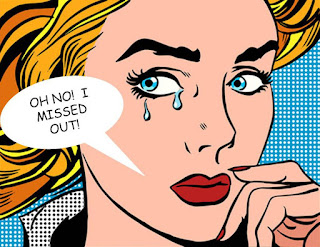 FOMO - the fear of missing out - is a form of social anxiety stemming from the belief that other people might be having fun whilst you are stuck at home checking your social media feeds, or writing your blog [1].
Of course, no one likes to feel that opportunities to interact with others, enjoy new experiences, or witness memorable events are passing them by; no one wants to be left out of the loop. And so, in a sense, FOMO is justified. However, as Nietzsche reminds us, life is all about making choices and to choose is to forgo.
In other words, whatever you decide to do (or not to do), you are instantly renouncing all other possibilities and everything else that would follow as a result. Thus, human life will always produce feelings of regret because it will always involve the existential dilemma of choice.
We are, if you like, Fomo sapiens and even those showoffs who compile lengthy bucket lists, don't get to go everywhere, do everything, meet everyone, etc. Having said that, however, we can refuse regret, like Edith Piaf, and we don't have to let FOMO become a pathological form of anxiety. If we can curb our enthusiasm, so too can we curb our fear of missing out.
And who knows, there may even be an endless number of parallel universes, with countless versions of you, doing all the things you think you are missing out on doing here in this life, in this world [2] ...
Notes
[1] If you read the Wikipedia entry on this topic, you'd think that the fear of missing out is a relatively new phenomenon; one first identified by a marketing strategist in 1996. But that, of course, is nonsense. Social media may have intensified the experience - and the acronym FOMO may be of recent invention - but the fear of missing out has long predated the internet.
Indeed, readers of D. H. Lawrence will be familiar with the character of Owen Rhys; an American playboy and poet, keen to experience all that Life might have to offer, no matter how sordid or ghastly. Owen is constantly: "Swept with an American despair of having lived in vain, or of not having really lived. Having missed something. Which fearful misgiving would make him rush like mechanical steel fillings to a magnet, towards any crowd in the street. And then, all his poetry and philosophy gone with the cigarette-end he threw away, he would stand craning his neck in one more frantic effort to see - just to see. Whatever it was, he must see it. Or he might miss something."
- See D. H. Lawrence, The Plumed Serpent [1926], ed. L. D. Clark, (Cambridge Unversity Press, 1987), p. 28. And see also my recent post written in defence of Owen Rhys: click here.
[2] This is just one of the consoling theories - I almost wrote fantasies - of quantum physics. In brief - and as far as I understand it - according to the Many-Worlds Interpretation, every event that has multiple possible outcomes splits the world into alternate realities (none of which interact or influence one another in any way). Obviously, it's a highly contentious idea - one which many theorists dismiss as not merely flawed (because based on an overly-simplistic account of quantum mechanics), but absurd. Stephen Hawking, however, was a fan, describing the MWI as self-evidently true.
Those who wish to know more about this can click here to read an entry on the subject in the Stanford Encyclopedia of Philosophy.
Posted by Stephen Alexander at 17:04