I Shall Speak of Geist, of Flame, and of Glimpses 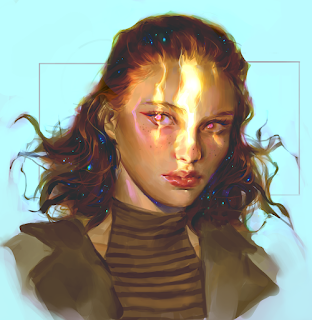 Glimpse of a goddess (2017) by Syd Mills (Vetyr)
See: V's art on tumblr.com
Buy: on inprnt.com
I.
One of my favourite English words of German origin is glimpse.
Whilst most people understand it simply to mean a brief or partial view - to catch a quick look, perhaps in passing, of something or someone - it has a more poetic and philosophical resonance for those with ears to hear ...
II.
D. H. Lawrence, for example, was fascinated by the word glimpse and often used it in the verses found in The Nettles Notebook, suggesting that aspects of divinity are revealed in the faces and forms of people when they are momentarily unaware of themselves:
When men and women, when lads and girls are not thinking,
when they are pure, which means when they are quite clean from self-consciouness
either in anger or tenderness, or desire or sadness or wonder or mere stillness
you may see glimpses of the gods in them. [1]
It's this glimmer of godhood which gives human beings their more-than-human beauty; which makes the flesh gleam with a kind of radiance or the bright flame of being:
O, if a flame is in you, be it so!
When your flame flickers up, and you flicker forth in sheer purity
for a moment pure from all conceit of yourself, and all after-thought
you are for that moment one of the gods [...] [2]
Without this flamy element, we cannot become who we are, says Lawrence.
III.
German philosopher Martin Heidegger would surely appreciate what Lawrence writes here. For he too wrote of flame (as the being of spirit) [3] and he also privileged the word Blick, which I would translate as glimpse, but which is given here as glance:
"In the glance [im Blick] and as the glance, what is essencing enters into its own illumination. Through the element of its illumination, the glance shelters back in the glancing whatever it catches sight of; at the same time, glancing likewise guards in illumination the hidden darkness of its provenance as what is unilluminated." [4]
A glimpse is thus a kind of lightning flash in which the truth of being is revealed.
In other words, it provides what Heidegger describes as an insight into that which is. And that's important: for as long as we do not experience what is, then "we can never belong to what will be" [5].
Notes
[1] D. H. Lawrence, 'All sorts of gods', The Poems, Vol. 1, ed. Christopher Pollnitz, (Cambridge University Press, 2013), p. 579.
See also the related verses 'Glimpses' [579], 'For a moment' [579-580], and 'Man is more than homo sapiens' [581-82].
[2] D. H. Lawrence, 'Be it so', ibid., p. 581.
[3] Derrida picks up on the idea that in German Geist ist Flamme (rather than breath, as it is in Greek and Latin); see Of Spirit: Heidegger and the Question, trans. Geoffrey Bennington and Rachel Bowlby, (University of Chicago Press, 1989).
Readers of Nietzsche may also recall at this point his famous closing line to the poem 'Ecce Homo': Flamme bin ich sicherlich! The poem can be found in 'Joke Cunning, and Revenge', Nietzsche's prelude of rhymes to The Gay Science.
[4] Martin Heidegger, 'The Turn', from the 1949 Bremen Lecture series Insight Into That Which Is, see Bremen and Freiburg Lectures, trans. Andrew J. Mitchell, (Indiana University Press, 2012), p. 70.
[5] Ibid., p. 72.
Posted by Stephen Alexander at 15:03