On the Spiritualisation of Politics 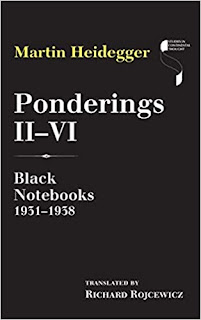 (Indiana University Press, 2016)
When, in the Black Notebooks, Heidegger attempts to distinguish a spiritual national socialism from its more vulgar form [1], I assume he's dreaming of a non-ideological politics founded upon a non-theoretical understanding of being, contra the crude biological fantasy of racial purity adhered to by Party ideologues like Alfred Rosenberg.
But I might be mistaken. For it's tricky - to say the least - to know for sure what Heidegger means when he speaks of Geist (or national socialism) and one invariably falls back on Derrida's brilliant and provocative study, Of Spirit, in search of clues [2].
Whether I do or do not fully understand what Heidegger means, I'm reminded that D. H. Lawrence anticipated this spiritualising of national socialism in The Plumed Serpent (1926); i.e., several years before Heidegger made his (infamous) rectoral address in 1933.
As Lawrence soon discovered, the problem is that when one attempts to realise one's ontological vision - or substantiate living mystery - within the world of history and politics, one opens up not only new areas of thought, but new (and tragic) possibilities of action.
For even the most spiritual of revolutions requires "manipulative controls and coercive regulations to sustain itself against those who resist or evade its strictures" [3]. And so it is that Ramón's neo-pagan revolution soon collapsed into a black hole:
"The whole country was thrilling with a new thing, with a release of new energy. But there was a sense of violence and crudity in it all, a touch of horror." [4]
Much the same could be said of Hitler's Third Reich; it promised to restore to the world an aura of primordial wonder, but ... Well, we all know what happened in the end [5].
Notes
[1] See Martin Heidegger, 'Ponderings and Intimations' III, in Ponderings II-VI: Black Notebooks 1931-1938, trans. Richard Rojcewicz, (Indiana University Press, 2016).
[2] Jacques Derrida, Of Spirit: Heidegger and the Question, trans. Geoffrey Bennington and Rachel Bowlby, (University of Chicago Press, 1989).
Derrida's musing on the shifting role of Geist in Hedegger's work - particularly after 1933 and in relation to the latter's engagement with national socialism - remains fascinating, even if written more than twenty-five years prior to publication of the Schwarze Hefte (which commenced in 2014).
[3] William E. Connolly, Political Theory and Modernity, (Basil Blackwell, 1988), p. 66.
The problem is, even if a movement is populist in character, it still cannot speak to and for everyone in a modern plural society - and that's why even the most spiritual of revolutionary leaders ends up relying on the army and secret police.
[4] D. H. Lawrence, The Plumed Serpent, ed. L. D. Clarke, (Cambridge University Press, 1987), p. 420.
[5] Similarly, we all know how things turned out in Iran after the 1979 revolution, which, at the time, was greeted enthusiastically by numerous intellectuals, including Michel Foucault, who believed it promised a welcome new form of political spirituality. See James Miller, The Passion of Michel Foucault, (Flamingo, 1994), p. 309.
Posted by Stephen Alexander at 10:14